On May 7, in spite of doubts about its compatibility with the Constitution of India and the United Nations Convention on the Rights of the Child (“UNCRC”), the Lok Sabha passed the Juvenile Justice (Care and Protection of Children) Bill, 2014 (“JJ Bill”). While the Bill has some positive provisions, it allows children between the ages of 16 and 18 years, who are alleged to have committed heinous offences, to be transferred to an adult court where they will be tried and sentenced as adults. Heinous offences are those punishable with more than seven years imprisonment.

India had ratified the UNCRC in 1992. In February 2000, the UN Committee on the Rights of the Child (“CRC”) questioned India about the discriminatory nature of the definition of the term ‘juvenile’ under the Juvenile Justice Act, 1986 and recommended that it be amended “to ensure that boys under 18 years are covered by the definition of juvenile, as girls already are”. The legislative intention behind the Juvenile Justice (Care and Protection of Children) Act, 2000, evident from its Statement of Objects and Reasons, was to ensure compliance with children’s right to equality and non-discrimination under the UNCRC. “The justice system as available for adults is not considered suitable for being applied to a juvenile or the child or any one on their behalf including the police, voluntary organizations, social workers, or parents and guardians, throughout the country.” Fifteen years later, the very same Minister of Women and Child Development has defended the treatment of children as adults with a view to deter juvenile crime.

Article 2 of the UNCRC requires all state parties to abide by the principle of non-discrimination and ensure that all children in conflict with the law are treated equally. It follows that the disadvantageous treatment of children based on their age and the nature of the offence they allegedly commit would constitute a violation of Article 2.

Through the introduction of a transfer system and a preliminary assessment procedure to determine the capacity of a child to commit the crime prior to the establishment of guilt, the JJ Bill flouts some of the most basic tenets of the UNCRC. The CRC has categorically condemned the treatment of children as adults. It has recommended that:

“… those States parties which limit the applicability of their juvenile justice rules to children under the age of 16 (or lower) years, or which allow by way of exception that 16 or 17-year-old children are treated as adult criminals, change their laws with a view to achieving a non-discriminatory full application of their juvenile justice rules to all persons under the age of 18 years.”

The transfer provisions grossly violate Article 2 of the UNCRC and incorporates punitive goals that have no place in the juvenile justice system envisaged under the UNCRC. 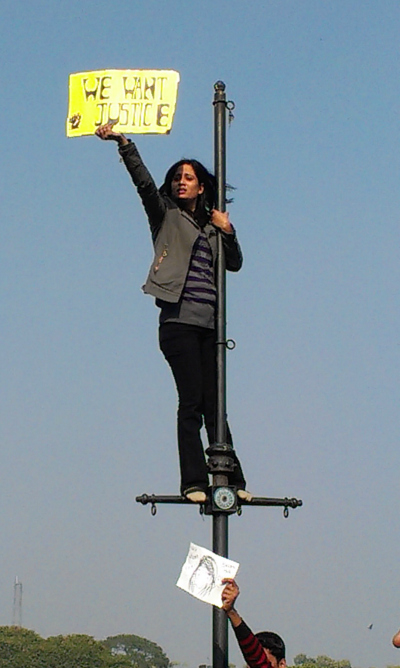 The age of one of the offenders in the gruesome December 2012 rape in Delhi, was one of the focal points in the protests that followed.

The JJ Bill wrongly posits the issue of heinous offences by children as a “conflict” between public safety, justice, and children’s rights. It falsely claims to be in the interest of the safety of victims. The CRC has expressly tackled concerns about public safety in connection with juveniles who commit heinous crimes and emphasised the principles that must underpin the State’s response. “In cases of severe offences by children, measures proportionate to the circumstances of the offender and to the gravity of the offence may be considered, including considerations of the need of public safety and sanctions. In the case of children, such considerations must always be outweighed by the need to safeguard the well-being and the best interests of the child and to promote his/her reintegration.”

This perceived conflict between concerns about public safety and the best interests of juveniles had arisen earlier in the context of trials of children under anti-terror laws. In 2004, in its Concluding Observations on India, the CRC had expressed concern about the prosecution of children by special courts under the Prevention of Terrorism Act, 2002 in contravention of Articles 37, 40, and 39 of the UNCRC. In response, India amended the JJ Act in 2006 and introduced Section 1(4), which unequivocally clarified that the juvenile justice law would override all other laws with regard to detention, prosecution, penalty, or sentence and apply to all cases of children in conflict with the law without any exception. The JJ Bill therefore, represents a radical shift in policy within a span of nine years, without any evidence to support it.

Life imprisonment with the possibility of parole offends the right to life, survival and development

The CRC has strongly recommended that State Parties “abolish all forms of life imprisonment for offences committed by persons under the age of 18.”Under Clause 22 of the Bill, life imprisonment with the possibility of release can indeed be imposed on children above 16 years. This goes against the recent normative developments at the international level.

According to the Article 40(1) of the UNCRC, all children in conflict with the law must be treated in a manner that is consistent with their sense of dignity and worth and reinforces their respect for human rights and fundamental freedoms. The treatment must ensure promotion of their reintegration into society. The JJ Bill, 2014 ignores the aims of reintegration and restoration of a child in conflict with the law, by providing for a highly arbitrary determination of their capability to make ‘meaningful contributions’ to society when they reach the age of 21 years. A failure to pass this test would result in an automatic transfer to an adult jail. Even if a child is found to have undergone reformative changes at the end of this assessment process however, she or he will incur the disqualifications attached to the conviction, making it impossible to secure gainful employment or stand for elections. In effect, reintegration would be impossible.

The UNCRC expressly requires that all children deprived of their liberty be separated from adults. The CRC has clarified that this separation is not merely technical and “does not mean that a child placed in a facility for children has to be moved to a facility for adults immediately after he/she turns 18.” On June 13, 2014, the CRC’s Concluding Observation on India’s juvenile justice system was that it must ensure “age-appropriate separation of children in Observation and Special Homes and that children in conflict with the law are not detained together with children in need of protection or with adults and that detention conditions are compliant with international standards, including with regard to access to education and health services”.

In gross disregard of Article 37(c) and the Concluding Observation on it, the JJ Bill takes an untenable position on the separation of children from adults, by proposing that the former be transferred to adult prisons if they fail an assessment of their reformation when they complete 21 years of age (Clause20(3)). Such a transfer is incompatible with the clear prohibition on the detention of children with adults under the UNCRC.

Clause 16(1) of the Bill requires the Juvenile Justice Board to assess, along with the circumstances in which the child has allegedly committed the heinous offence, whether he or she had the physical and mental capacity to commit it. This assessment, the basis for transferring a child to the Children’s Court, which is a designated Sessions Court, operates on the assumption that the child has indeed committed the offence and thus violates the cardinal principle of presumption of innocence under Article 40(2)(b)(i). Such arbitrary assessments will invariably prejudice the trial before the Children’s Court.

It is evident from the CRC’s General Comment and Concluding Observations that all other considerations however legitimate they may be, will have to be overridden by what is in the best interests of the child. Concerns about public safety or the gravity of offence cannot be the basis for reenactment of a law that pledges to protect and promote the rights of children by disposing matters in their best interest. In its 264th Report, the Department-Related Parliamentary Standing Committee on Human Resource Development on The Juvenile Justice (Care and Protection of Children) Bill, 2014 also noted that clauses 15(3), 16(1), 19(3), 20(1), 20(3), 21, and 22 of the Bill constituted distinct violations of the provisions of the UNCRC, 1989 (para 3.29) and recommended their deletion. However, all these provisions have been retained in the Bill passed by the Lok Sabha, which ironically cites the UNCRC in its Preamble.