In an important judgment this week, the Supreme Court upheld Articles 15(5) and 21A of the Constitution of India against a basic structure challenge. 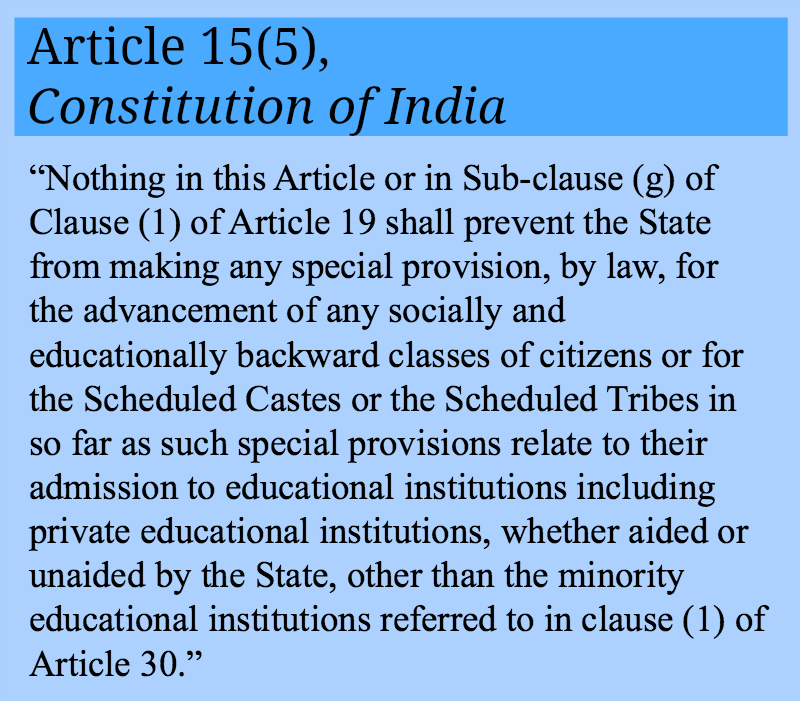 In Ashoka Kumar Thakur (2008), a Constitution Bench had upheld the validity of Article 15(5), save for its application to private un-aided educational institutions. That question had been left open for another day, and was finally answered this week. Alongside it was the question of whether Article 21A, which guarantees the right to a free and compulsory education between the ages of six and fourteen, is consistent with the basic structure.

It is trite knowledge that Kesavananda Bharati v. State of Kerala established the proposition that Parliament, in the exercise of its amending power, cannot “damage or destroy” the Constitution’s basic structure. Over the years, basic features of the Constitution have been identified in the language of abstract principle: separation of powers, the rule of law, a democratic and republican form of government, secularism, judicial review, and so on. In this case, the petitioners made a novel claim: Article 19(1)(g), which guarantees the freedom of occupation, was a basic feature, and that Article 15(5) eliminated it entirely. It was argued in addition that by “treating equals unequally”, there was an Article 14 violation as well.

If you find something odd about these claims, you’re right. Typically, Articles 14 and 19(1)(g) are invoked to challenge the constitutionality of a law. Here, however, it is not a law that is at stake. A Constitutional right itself is being attacked for violating other constitutional rights. Thus, we have the odd argument that some constitutional provisions stand in a hierarchical relationship above others. This cannot be right. It is precisely to avoid this manner of claim that the Supreme Court, over the years, has steadfastly refused to locate the basic structure in any one provision, but has understood it to embody abstract principles that underlie and justify concrete provisions.

Admittedly, some provisions are integral to the basic structure. Undoubtedly, if Parliament simply repealed Article 14, thus removing the anchor for the principles of “equality before law” and “rule of law”, a basic structure challenge would be sustained. Arguably – although more controversially – eliminating Article 19(1)(g) from the Constitution altogether would violate the basic structure. Article 15(5), however, does nothing of the sort. It just carves out a fairly narrowly drawn exception to Article 19(1)(g): that the Article will not apply only to the special provisions aimed at advancing socially and educationally backward classes. This language is familiar to us from Article 16(4), and leaves ample scope for judicial review, as is evidenced from sixty years of affirmative action jurisprudence, which has placed substantial limits both on the government’s identification of beneficiaries, as well as the extent to which reservation is permitted. Admittedly, it goes against a strictly formalistic, colour-blind vision of equality, but so do all reservation provisions under the Constitution – Articles 15(4), 16(4), 16(4A) and 16(4B).

These were precisely the arguments that the Court used to reject the basic structure challenge. Article 15(5), insofar as it sought to equalise the educational opportunities of members of socially and educationally backward classes, did not destroy equality. Rather, it adopted a group-and-context sensitive vision of equality that took into account historic and continuing structural subordination in determining present allocation of resources. As the Court has held before, the Constitution holds both these visions of equality in balance. Therefore, it also clarified – correctly, in my opinion – that Article 15(5) would not prevent it from reviewing laws on the touchstone of Articles 14 and 19(1)(g). Article 19(1)(g), for instance, would continue to apply if the government failed to demonstrate that the requirements of Article 15(5) were satisfied. Article 14 would continue to apply in all cases. For example, if the government imposed an 80% reservation requirement on private schools, it is likely that the Court would not find it to fall within Article 15(5) at all, and almost certain that it would strike it down under Article 14.

In challenging Article 21A, the petitioners made another curious argument.

The Right of Children to Free and Compulsory Education Act, 2009, (“RTE Act”) as is well known by now, requires private, un-aided schools to accept 25% of their total admitted students from underprivileged backgrounds. The petitioners used this to argue that because Article 21A imposed constitutional obligations upon private parties, it violated the basic structure. Naturally, the Court gave short shrift to this argument. Article 21A does nothing of the sort. It provides a right to education that is enforceable against the State. Under the RTE Act, the State carries out its obligations by imposing certain regulations of admissions upon private schools. While that might raise constitutional questions about the Act, it does not, in any way, affect Article 21A itself.

Of course, the constitutional validity of the RTE Act – including the 25% requirement – was challenged, and upheld, in Society for Un-Aided Private Schools of Rajasthan v. Union of India. After having upheld the validity of Article 21A then, the Court needed to go no further. It clarified, however, that while Article 21A vested in the State the power to make law to discharge its educational obligations, the scope of that Article – and consequently, the scope of the power it conferred upon the State – would still be interpreted harmoniously with Articles 19(1)(g) and 30. Consequently, a law made under Article 21A would continue to be tested for reasonableness under Articles 19 and 30. Notice how this analysis mirrors the Court’s analysis of Article 15(5), and leaves it with maximum judicial wiggle room to examine laws as and when they are made.

Harmoniously construing Articles 21A and 30(1), the Court held that the minority institutions’ right to preserve their character necessitated excluding the applicability of the RTE Act to those institutions. It also found that Article 21A provided a basis separate from Article 19(6), for justifying the 25% seat reservation. This, I would suggest was unnecessary. It would have been doctrinally more satisfactory to use Article 21A – as the Supreme Court did in Society for Un-Aided Private Schools – to adjudicate upon the reasonable restriction that the RTE Act placed upon private schools, and uphold it on that basis. The Supreme Court’s opinion, however, implies that we now have two separate bases for restricting Article 19(1)(g) rights: 19(6) and 21A, and it is entirely unclear how these two relate to each other.

Ultimately, the opinion is characterised by pragmatism. The Court maintains its time-honoured tradition of judicial avoidance when it comes to basic structure claims. At the same time, it leaves its hands untied to scrutinise legislation passed under the two amendments on the touchstone of existing constitutional rights, as and when it might come to court.