On August 12, the Telecom Regulatory Authority of India (“TRAI”) released a set of recommendations on issues relating to media ownership (Medianama has a great summary, available here). TRAI’s recommendations cover a range of topics, including political and corporate control over the media, issues of horizontal and vertical integration, private treaties, and paid news. The background of the enquiry is revealed in the Introduction. The second paragraph, for instance, notes that: “the right to freedom of speech is essential for sustaining the vitality of democracy. This is why the right is sacrosanct; it is fiercely protected by the media. The question that arises is whether reposing such a right in the media simultaneously casts an obligation on the media to convey information and news that is accurate, truthful and unbiased… the point is: is not the right of readers and viewers to access unbiased and truthful information from the media embedded in the right of the freedom of speech of the media?” (1.2)

Is it, though? Some countries have embedded this viewpoint in their constitutional texts. The German constitution, for instance, guarantees to everyone the right to “freely inform himself from generally accessible sources.” The International Covenant on Civil and Political Rights, whose language is closely mirrored by the South African constitution, protects the right to “seek, receive, and impart information.” These constitutions accord equal weight to the interests of both parties to a system of communication: the speakers (that is, in this case, the media), and listeners (readers and viewers). By comparison, Article 19(1)(a) is sparsely-worded and speaker-oriented: “all citizens shall have the right to freedom of speech and expression.”

Over the decades, Article 19(1)(a)’s inconclusive language has divided the Supreme Court of India. Judicial history reveals two distinct – and contrary – understandings of our free speech clause. Let us call these the libertarian understanding and the social-democratic understanding respectively.

According to the libertarian understanding, the free speech clause protects the interests of speakers against coercive governmental control. Freedom of speech exists so that the street-corner orator and the dissident journalist can disseminate their opinions to the public without fear of State persecution or censorship. State regulation that curtails the power of any entity to “speak” is therefore presumptively unconstitutional (it might, of course, be saved by Article 19(2)). The libertarian understanding is best exemplified by the Supreme Court’s newspaper-regulation cases, starting with Sakal Papers v. Union of India, in 1960. In that case, the government imposed a price-per-page regulation upon newspapers, and also restricted the number of advertisements they could carry, as well as the volume of Sunday supplements. The affected newspapers took the case to the Supreme Court. The government argued that the purpose of the regulations was to break the market-monopoly enjoyed by established newspapers. Because of economies of scale, such newspapers were able to keep their prices so low, that they became a veritable entry-barrier for new newspapers to access the market. Or, in other words, the regulations were aimed at facilitating the free speech interests of the public (to have access to a diverse set of sources of news) and non-established media players who wished to enter the market. The Supreme Court rejected this contention, and struck down the regulations on 19(1)(a) grounds.

The government’s argument in Sakal Papers reflects the social-democratic understanding of free speech. Free speech – on this view – is an integral part of democracy, and its value – to quote the American Supreme Court judge Hugo Black – “rests on the assumption that the widest possible dissemination of information from diverse and antagonistic sources is essential to the welfare of the public.” The roots of the argument go back to the great free speech scholar Alexander Meikljohn, who argued that if citizens are to effectively participate in the democratic project, then they must have access to information and i 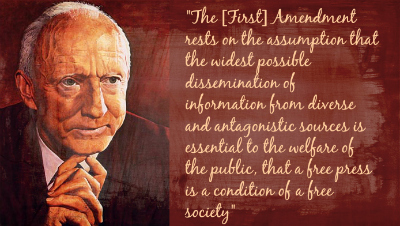 deas on the basis of which they can formulate sound opinions about the common good, and exercise refined political judgment. Unlike the libertarian understanding, which puts State and individual at odds, the social-democratic understanding views State and individuals as collaborators in an enterprise aimed at creating thriving and vibrant public sphere. On this understanding, the market – just as much as the State – can become an impediment to this project (as was the case in Sakal Papers).

The Supreme Court in Bennett Coleman affirmed the decision in Sakal Papers (over a strong dissent by Justice K.K. Mathew). In other cases, however, the Court has adopted the opposite viewpoint. In LIC v. Manubhai D. Shah, it imposed a compulsory right-of-reply upon the in-house journal of the Life Insurance Corporation, so that readers could have access to both sides of a debate. And in Cricket Association of West Bengal – which was a case about broadcasting regulations – it famously held that “it is justified by the Government to prevent the concentration of the frequencies in the hands of the rich few who can monopolise the dissemination of views and information to suit their interests and thus in fact to control and manipulate public opinion in effect smothering the right to freedom of speech and expression and freedom of information of others.”

The basic concern of the social-democratic approach – as vividly exemplified by the quoted excerpt – is that the freedom of speech, in today’s world, is mediated by a market-based infrastructure (televisions, newspapers), access to which is often in the hands of non-State parties. If the goal is to create a thriving public sphere, then regulating this market becomes not only desirable, but positively necessary.

TRAI recommendations go beyond competitiveness in the media market

With the Supreme Court’s jurisprudence split down the middle, the TRAI Recommendations unambiguously take the side of the social-democratic approach. For instance, in the Introduction itself, TRAI rejects the argument that the existing regulatory regime of competition and anti-trust law, which is aimed at preventing market dominance in a way that stifles effective competition, is sufficient in the sphere of the media. It notes that “the media cannot, and should not, be bracketed with general commodities and services… the principles adopted in the competition law may not serve the special purpose of addressing the need for plurality of news and views.” (1.12) This is a particularly interesting observation. On the libertarian model, government intervention should be restricted to cases of market failure, which are specified in an effective competition law regime. The TRAI Recommendations are based on the premise, however, that because of the importance of free speech to the democratic project, it is not sufficient merely to maintain a threshold level of competitiveness, but intervene further in order to ensure the goal of plurality.

These ideas come to the fore in TRAI’s substantive recommendations. In Chapter Two, it is concerned with defining the concept of “control” in the case of media companies. “Control” is defined both in the Companies Act, and by the Competition Commission. TRAI observes, however, that “in view of the sensitivity surrounding the diversity of news and views in a democracy, it is important to frame rules to include all possible mechanisms by which an entity can influence a media outlet… a comprehensive definition of control [is required] exclusively for the media industry.” (2.9) TRAI’s final definition of control is wide-ranging, and includes “covert understandings” that enable entities to control “decision-making in the strategic affairs… and appointment of key managerial personnel” of a media outlet. (2.13)

The definition of control is central to assessing the “diversity” of media markets, and it is the objective of achieving diversity and plurality that constitutes the core of TRAI’s Recommendations. Chapters Three and Four address issues of “external pluralism” – that is, diversifying ownership and control, and preventing vertical integration of media markets. When identifying the relevant “market” in order to address cross-media ownership issues, TRAI restricts itself to the news and current affairs genre, because of its centrality to “influence[ing] the opinion-making of citizens.” (3.13) It restricts the relevant segments to television and print (excluding the Internet) because of the reach they enjoy. And it defines the geographical market in terms of language, and the State in which that language is spoken in majority. For example – to use the example TRAI gives – a relevant “market” (to assess issues of concentration and diversity) would be Bengali newspaper and television market, which is engaged in the dissemination of news and current affairs, in West Bengal. (3.28) As one can see, the dominant idea is that the average Bengali consumer’s main source of news is Bengali television and Bengali newspapers. Plurality within this market, so defined, is therefore of utmost importance. The Recommendations then go on to make technical suggestions about the regulations needed to prevent and dilute concentration.

The TRAI Recommendation are not, however, limited to ensuring external pluralism by enabling a diversity of voices to access the marketplace. Chapter Five addresses concerns of internal pluralism – that is, not just who is speaking, but what is being said. Here, the Recommendations address the problems of paid news, private treaties (through which a media entity acquires shares in a corporation in return for favourable reporting), advertorials (advertisements which, in form, content and placement, provide a misleading impression that they are news reports), and the blurring of ownership and editorial functions. TRAI recommends statutorily rules that expressly proscribe these practices. As we can see, these recommendations are grounded in the idea that the freedom of the media to communicate is subordinate to its responsibility to ensure that the content of what it communicates is free of vested interests. This takes us back to the social-democratic understanding of free speech, where the ultimate objective is to ensure that no entity – whether the State, using its coercive power, or private players, using their market power – can distort the free and holistic circulation of ideas and information in the public sphere.

Taken as a whole, the Recommendations are rich and detailed, and provide much food for agreement as well as disagreement. For instance, restricting the product market to “news and current affairs” ignores the pervasive influence of culture in the public sphere. Indeed, it rests upon a particularly constricted idea of free speech and “democracy” (that, as being restricted to the explicitly political) that was first propounded by Meiklejohn, but which he himself subsequently repudiated, in favour of a broader understanding. Nonetheless, the aim of this essay has been to demonstrate that the best way of understanding and assessing these Recommendations is to ground them within a particular (and contested) understanding of Article 19(1)(a), that has – at least partially – been endorsed by the Supreme Court.