Let’s be honest. By now, you don’t really need any more of my advice. You probably know your surroundings already, having found things out in person or by talking to your seniors. I’ll just try to be useful as I write about moot court competitions (“moots”).

I assume that by now, you must have been exposed to this law school activity, either through a demonstration, a formal discussion, or just by interacting with your seniors. You hear many things about moots: that moots are a great way to see new places and meet new people (yes, some people do think mooting is the best way to socialise!), that they’re great for ‘C.V. value’, that they are possibly the closest thing to a real court experience (more on that later), and that they teach you a lot about law. Almost every law student gets drawn into taking part in a moot for one reason or another, honestly thinking that it will help them to get whatever they have set out to achieve. A moot may get you all of these and much more including money, newfound respect, and status but your moment in the sun will come only after a pretty long process. 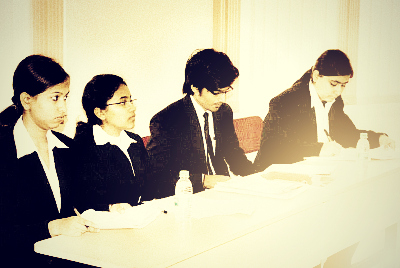 In a moot, you have to present oral and written arguments for both sides of a hypothetical legal dispute. In a competition, different teams argue the same problem across several rounds, possibly for different sides. It is a splendid idea, for what better way to become a lawyer than by practicing to argue? The hypothetical problems are usually challenging and some effort is required to grasp the legal issues involved. Then comes the hard part: framing arguments in written submissions. It is a good idea to pick a moot topic on an area of law that you like, or want to explore, because not only do you gain a vast amount of knowledge, but you also sharpen your legal writing abilities. Then the glamorous bit: presenting your arguments to a panel of judges within a limited time. Speaking in moots provide an amazing opportunity to learn what it takes to convince someone that you make sense. It also does wonders for building your own self-confidence.

‘Happy faces holding a trophy’ however, is not always the fall-out of a moot competition. Success or failure doesn’t remain confined to your team but tends to go under the college microscope, and some of the judgments made can become indelible. Here, I must say a word or two about what I think is wrong with the system.

A law school’s worth in salt seems to be weighed heavily in terms of its moot wins. This puts immense pressure on the students. The focus shifts from the learning aspect to just winning or losing. A Mooting Premier League (“MPL”) exists and the winner receives a trophy at the end of the ‘moot season’. Though it seems nice, I remember being utterly shocked to see how seriously students treated these MPL rankings! Over time, it became a constant source of amusement. Pride in mooting at the college-level is quite funny, especially since moots are rarely a college-level effort. Barring the provision of research material, moots only reflect the efforts of a group of close-knit individuals who are reliant on their own individual efforts. I strongly believe that the best way for an institution to treat a moot court competition is to treat it as just another activity for students, and stop placing it on a hallowed pedestal.

Let me share my story to end this note. In my final year, I finally decided to compete in a moot. As luck would have it, I ended up getting to be the speaker for what most consider as ‘the Big Cup’. Nervous doesn’t even begin to describe my condition before the very first round. At that moment, I received  a call from someone who had taken part in the same competition several years ago, to wish me luck. He told me that looking back, he felt he gave undue importance to success or failure in this one event of his college life.

Now that’s what a moot really is­­­ – one event, out of the many experiences you will have over your five years at law school. The moot alone is not going to remarkably enhance your C.V., it won’t magically turn you into a stunning lawyer, and trust me, there are much better ways to travel and see new places. At its core, a moot is just an activity designed to help you to learn more about an area of law and become a better lawyer. So, don’t get fooled into thinking that moots are the end of the college-world. For better or for worse, law school is not such a simple experience.

(Abhinav Sekhri is a fifth year student at the National Law School of India University, Bangalore. All articles in this series are here.)

6 replies on “The truth about mooting”

Studying in DU, I took participation in moot two times only two find out the judges are too juvenile in their intellectual ability two judge. Or perhaps they judge with all the prejudices they have accumulated without ever arguing in a real court.

I too was too much into mooting during my law school days. If I had known what I do now, provably would have given other activities equal, if not more importance.

Hi. Well I guess that can be said vice versa by those who argue in court about moot judging. Rarely can judges be expected to know as much as you do about the case, so its unfair to dislike them for that. Having said that, its never pleasant to have a situation where it is very apparent that the judge has not done his homework.

The law school’s name often becomes the sole deciding factor of these competitions, I have personally seen the best mooters sitting across the audience area whereas below average teams from the most sought after colleges ends up bagging all..This needs to stop!! At least spare this activity out of disparity !

The name of the participants as well as college is prohibited to be divulged. 🙂
so this^ is untenable.