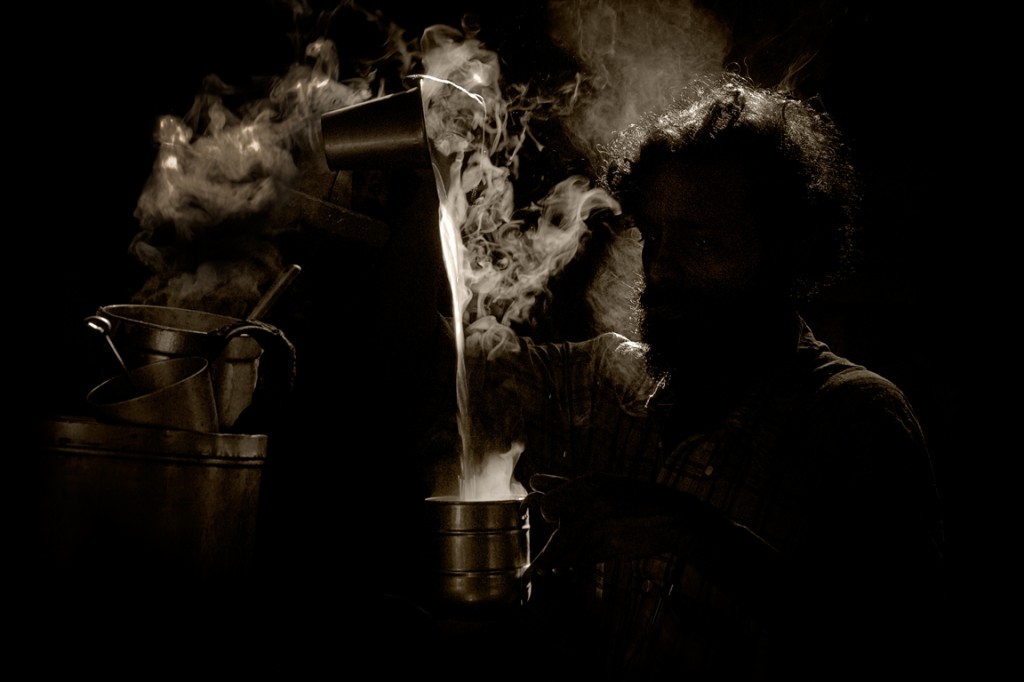 I decided to give Shubho, a friend from Calcutta, a glimpse of Kerala outside the tourism brochures. We were about 20 km from Alleppy town, and on our way to Kumarakom.  The plan to do the trip on a Bullet 500 was waylaid by two Kerala inevitabilities – rain and hartal. After taking a detour and riding an extra 15 km to avoid the local hartal, rain caught up with us. Realizing the eternal wisdom of “if you can’t escape it, enjoy it”, we stopped at a lonely roadside shack, a ‘thattukada’.

We had got prime seats for a surreal view of the monsoon when a bearded man in his mid thirties appeared and let loose at the pace of mutual funds being subject to market risks. I could make out a few words like beef, chicken, prawn, fry and “kappa” (meaning tapioca). I ordered everything dead, fried and roasted.

Shubho had been sore and angry about work as a litigator, and I had been trying to persuade him about the thrills of litigation. “I didn’t study five years of law to argue on notice period for a demand of payment”, he thundered.

Suddenly, the voice from inside the shack said, “within fifteen days of receiving information from the bank”. “See, even he knows that,” said Shubho, but I was taken aback. In Cochin, I had even seen an auto-driver reading Das Kapital, but this was unbelievable. Not only did this guy seem to know the law on the subject, he was speaking decent English too.

As soon as I had glibly finished explaining to Shubho how even small traders in Kerala were very literate about commercial laws, came the next bomb. “I am an advocate also”. My confusion at that point would have been similar to the feelings of friend after he had been “tranny tricked” in Pattaya. Shubho was so surprised that the beef fry remained untouched for 15 seconds.

Spurred on by our stunned looks, the man told us his story. Justin (name changed, the real name is ironically derived from the patron saint for advertisers) told us that he was a graduate from Ernakulam Law College, an education that continued for almost a decade. He had repeatedly flunked jurisprudence and constitutional law. The same teacher had taught both courses, and he suspected some personal bias probably because he used to be seen with a group that once almost buried the teacher’s car under sand for refusing to cancel class to commemorate Vietnam Day.

He waited till the teacher retired from service and then another two years for re-exams to be conducted, and almost a year for the results to be declared and moderated. Finally, on a rainy day in 2004, he enrolled as an advocate.

I wanted to ask him many questions, but realized that he had just started with his story. He proudly told me that when he finally passed his jurisprudence and constitutional law exam, he got full marks for his viva on the “Hard-devil debate”.

“I was always good with people. While studying in the college, I used to do a lot of odd jobs; I worked as an LIC sub-agent for almost a year. I used to earn enough money to survive”, he said to Shubho with a smile.  “After enrollment, I started working under an advocate in Alleppy. For the first 3 months, I did not make any money. It was a hard life. You had to be in court all day and in the evenings be in the senior’s office when the clients came. The job was basically scavenging whatever files the senior needed. After 3 months, I started appearing in court for adjournments. It was around that time that I was appointed as the fact-finding commission in a property dispute. It was like a miracle, so many juniors were sitting in the court and the judge had to choose me. I got 2000 rupees for the job. It was a lot of money for me then.

“Around that time, I realized that being just an advocate was not going to be enough, and my friends and I decided that it was time that we started some business. It was Christmas season and we had the idea to sell firecrackers. We got the money together and bought the crackers wholesale from Sivakasi. We made around 50% profit. But then, you can sell crackers only during season.

“Then, my uncle who had been running this shack fell ill. Anyway the business is only in the afternoon and I can go to court in the mornings

The rain was over and we had finished our food. It didn’t seem odd that Justin was not interested in knowing more about us, even after figuring out that we are also lawyers. He was just happy he found someone to talk to. We paid for the food and lit a cigarette. Shubho, who was finding it hard to divide his attention between the delicious food and Justin’s story, thought that he should take over the running of Calcutta High Court canteen.

We walked back to our bike, which was left in the rain. Confirming fears, it refused to start. My brother had warned me about the faulty wiring when he gave me the bike. After a few semi hearted kicks, I turned back and asked Justin expectantly, “Eh…do you by any chance know something about bikes too?”