The year is 1533 and it is a really strange time to be an English citizen. Henry VIII, the larger-than-life king of England, has begun to develop a holier-than-thou attitude. He believes he knows what god wants, despite unabashedly doing the very thing that the Catholic Church insists goes against divine will. He has already annulled his marriage with his long-suffering first wife, Catherine; romanced and possibly fathered children with her lady-in-waiting, Mary Boleyn; and then almost instantly grown tired of her and married her sister, Anne Boleyn. The Catholic Church has not taken kindly to this nearly blasphemous violation of canon law and has excommunicated him. Although Henry will sever all ties with the Roman Catholic Church and establish the Church of England, pompously declaring himself its Supreme Head, he will remain at heart a devout Catholic, adhering fervently to the core tenets of Catholicism. He believes god has bestowed upon him the “divine right of kings”, completely absolving him from being answerable to any temporal, earthly authority. He swiftly introduces this concept to the non-codified constitution of England. He truly believes he knows god’s will. 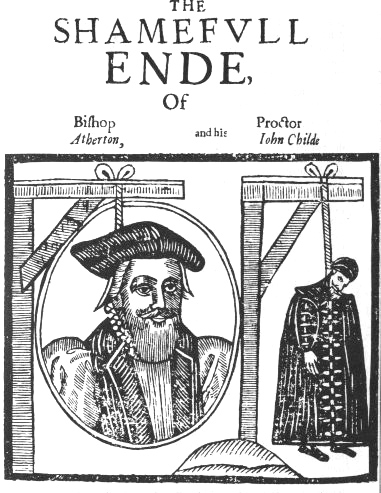 John Atherton, Bishop of Waterford and Lismore, was hanged for sodomy. The anonymous pamphlet (above) is from 1641. Public domain.

Which is perhaps the reason he has, with the help of his wily chief minister Thomas Cromwell, got the Buggery Act passed by the Parliament. It defines buggery as an unnatural sexual act against the will of god and man. And since Henry is in the best position to know the will of both god and man, he decides that the punishment should be death. Moreover, the convicted offender’s property and possessions should go not to his kin, but to the government. The real novel piece of legislation here is that even members of the clergy are not exempted from this law – a stunning declaration, given that in these times, priests and monks are not executed even for murder. Henry now goes about executing monks and nuns with a divine zeal and gaining monastery lands in the bargain. Of course he didn’t draft this law for the land – that’s just the spoils of a righteous war. Where there’s a divine will, there’s a bloody way.

Twenty years in the future, Queen Mary will repeal the Buggery Act, but then ten years after that, Queen Elizabeth I will bring it back. And so it will remain till 1828 when it will be finally repealed for good by the Offences against the Person Act. But not much will change. Buggery will remain a capital offence under the new act.

Fast forward to 1835. In England James Pratt and John Smith become the last British men to be hanged to death for the offence of buggery. In India, the First Law Commission is constituted and Lord Thomas Babington Macaulay is appointed its chairman. Lord Macaulay is the paragon of respectability, sophistication, and brilliance in British society. He has an eidetic memory and is considered a superb statesman, great orator, gifted poet, accomplished historian and expert in Greek, Roman, English, French, Spanish and German literature. But he is not without fault. By his own confession, he is completely ignorant about art and music. He is completely inept at games, sports, and physical skills, having trouble even with simple everyday tasks like shaving and tying a cravat. And he is also a product of his time. Which means he is a racist, colonialist, white supremacist, British chauvinist whose world-view is dipped in a thick, greasy, unpleasant coating of orientalism and Eurocentrism. This leads him to write things like this: “I am quite ready to take the oriental learning at the valuation of the orientalists themselves. I have never found one among them who could deny that a single shelf of a good European library was worth the whole native literature of India and Arabia. […] But when we pass from works of imagination to works in which facts are recorded and general principles investigated, the superiority of the Europeans becomes absolutely immeasurable. It is, I believe, no exaggeration to say that all the historical information which has been collected from all the books written in the Sanscrit language is less valuable than what may be found in the most paltry abridgments used at preparatory schools in England.” 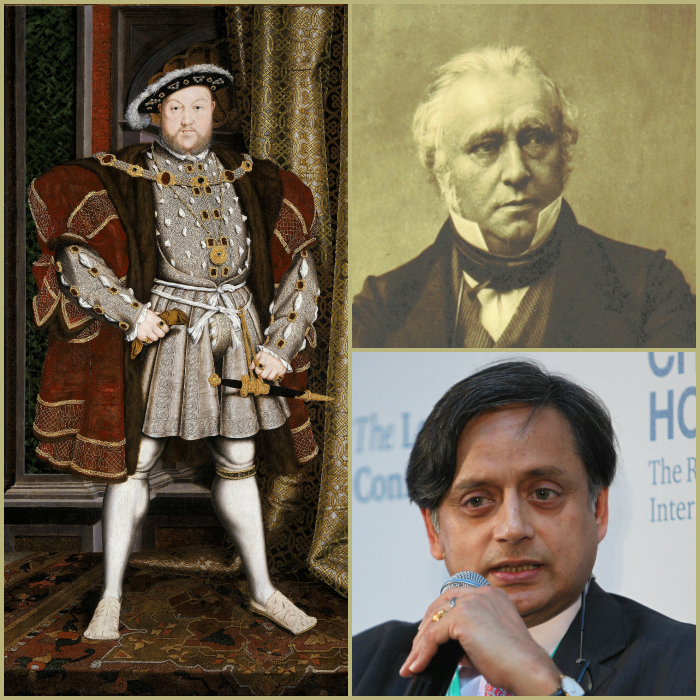 (Clockwise, from left to right) Henry VIII was King of England from 1509 until his death in 1547. Public domain. Thomas Babington Macaulay (1800-1859), as the leading member of the Law Commission, wrote the Indian Penal Code, 1860, which inspired counterparts in most other British colonies. Public domain. Congress MP Shashi Tharoor tried to introduce a private member’s bill to decriminalise gay sex by substituting some of the language in Section 377 of the Indian Penal Code. It was rejected in the Lok Sabha on December 18, 2015. Wikimedia Commons. CC BY 2.0.

At around the time Lord Macaulay sits down to draft the Indian Penal Code (“IPC”), the British have just recently discovered that slavery is a bad thing, and are still debating whether the same can be said about child labour. British women are still 83 years away from getting the right to vote and contest parliamentary elections. And homosexuals are considered so disgusting that they are still being hung to death. He submits the draft of the IPC to the Governor-General in 1837, the year Queen Victoria ascends to the throne and the Victorian era truly begins. But it will take another 23 years and several further drafts for the IPC to be finalised – 23 years that the IPC will spend baking and blistering in the searing, claustrophobic oven of Victorian era prudery, conservatism, ignorance and hypocrisy. This is a time when women are the new slaves, becoming the property of their husbands, treated like mildly intelligent breeding animals with no rights to speak of. Their husbands have total ownership and control over their bodies. The concept of consent with respect to sex does not even exist. Our legal provisions on adultery and sexual offences come from this period.

The final draft of the IPC is passed into law on October 6, 1860, but it comes into operation only in January 1862. Between the passing of the law and its coming into effect, something significant happens in England. The death penalty for buggery is abolished. Unfortunately, Lord Macaulay never gets to see any of this. He dies of a heart attack in 1859 at the age of 59.

Fast forward to 2015. Britain has come a long way. Way back in 1967, it legalised homosexual acts in private between two men who were 21 years of age or older. Then in 2001, it lowered the age of consent. In 2002, it granted same-sex couples equal rights to adopt. In 2004, it made it legal for same-sex couples to enter into civil unions. And then finally, in 2014, it made same-sex marriage legal. In India, things are a little different. Shashi Tharoor seeks to introduce a private member’s bill with amendments to the section at the Lok Sabha. It is met with loud nays, jeers, mocking and bigotry. Nishikant Dubey says he is not opposing it because of any “religion, Vedas or Puranas” but because of the Supreme Court judgment. The judgment in which the Supreme Court had said it would leave it to the Parliament to change the law. The bill isn’t even allowed to be introduced. We continue to hold on to a toxic and destructive colonial legacy.

Even the ghosts of Henry VIII and Lord Macaulay are bewildered.