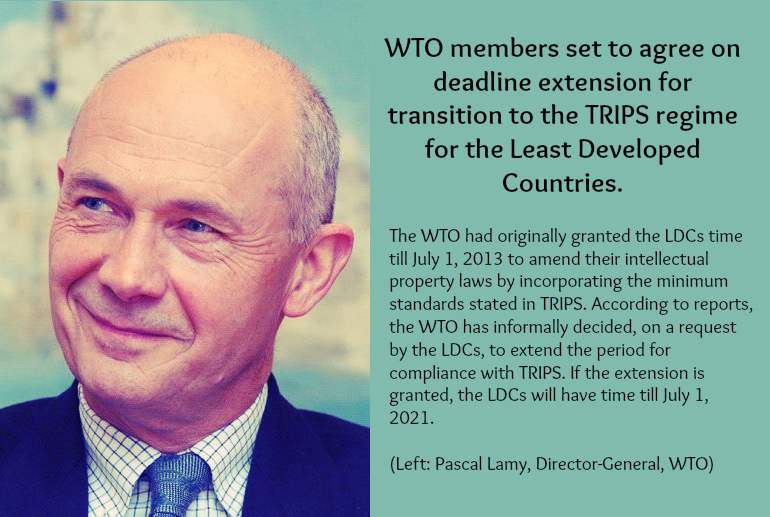 June 12, 2013: According to reports, even though most developed countries have opposed it, the WTO has informally decided to extend the deadline for the least developed countries (“LDCs”) to comply with the terms of the Agreement on the Trade Related Aspects of Intellectual Property Rights. The LDCs had sought more time from the World Trade Organisation (“WTO”) to comply with the terms of the TRIPS. Haiti had made the request on behalf of the LDCs in November 2012.

The WTO had originally granted the LDCs time till July 1, 2013 to amend their intellectual property laws, incorporating the minimum standards stated in TRIPS. Further, in relation to pharmaceutical patents, the LDCs had been given time till 2016.

The WTO Council on TRIPS met yesterday to formally decide on this issue and the meeting will continue today. If the extension is granted, the LDCs will have time till July 1, 2021 to comply with the requirements of TRIPS. This extension will not prejudice the right of the LDCs to ask for another extension in relation to pharmaceutical patents.

This is also seen as a victory for many non-governmental organisations such as the joint United Nations Programme on HIV/AIDS (“UNAIDS”) and United Nations Development Programme (“UNDP”) , which had argued for such an extension.