(In Camera is Sayak Dasgupta’s series of essays that examine the depictions of trials in cinema. He will look at how filmmakers have chosen to use trials and the criminal justice processes and what those depictions tell us about their view of cinema and the societies they made those films for.)

In Raj Kapoor’s directorial debut, Aag (1948), he played Kewal, a boy whose father is a successful lawyer and wants him to become one too. Kewal however, is not interested in the law; he wants to start his own theatre company. When he fails his law exams, he goes to his father and tells him as much. His father responds with an ultimatum: if he wishes to keep living in his father’s house, Kewal must forget about theatre. Kewal chooses to leave home. Aag, to use a rather obvious pun, didn’t quite set the box office on fire. It got a lukewarm response from audiences and quickly faded away. Unlike Kewal, something about the law must have appealed to the actor who played him, because three years later, in his third directorial venture, Raj Kapoor once again told the story of a son whose father is a lawyer. But this time, the story was entirely different.

Where Aag fizzled out, Awara exploded like a ton of dynamite not just in India, but all over the world. It became massively popular in South Asia, the Middle East, Turkey, the Soviet Union and most of eastern Europe. Search for “Awara Hoon” on YouTube and you will come across an array of endearing videos of Russian, Uzbek, Turkish, and Chinese people singing the song, in Hindi or translated in their native languages. It is said that Chairman Mao himself counted Awara among his favourite movies.

Awara was released four years after India gained its independence, and forty years before the liberalisation of its economy. The ideals of Nehruvian socialism were still very much an important part of the zeitgeist in India and would remain so for many decades to come. And at its core, the film is about class struggle. It isn’t surprising that the film appealed particularly to Indian, Soviet, and Chinese sensibilities at the time.

At that crucial moment in India’s history, Raj Kapoor’s films would go a long way in defining how commercially successful melodramas with a social message would be made for years to come. In this film, he chose to frame the narrative within a trial. 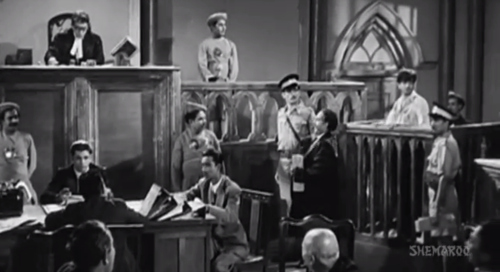 In fact, the film begins in a courtroom. A young man called Raj (Raj Kapoor) is accused of attempting to murder the widely respected Judge Raghunath (Prithviraj Kapoor). In true Shakespearean fashion, Raj’s defence attorney is his lover, Rita (Nargis), who questions Raghunath about his long-estranged wife, leading us into a flashback.

We discover that when Raghunath was a young and wealthy lawyer, his wife, Leela (Leela Chitnis), was kidnapped by the notorious thug, Jagga (K.N. Singh). Years ago, Raghunath had apparently managed to get him convicted for a rape that he had not committed, purely on the basis of the fact that his father and grandfather were criminals. You see, Raghunath holds the firm but bewildering belief that crime is a genetically transmitted disease. In other words, criminals are born to criminals, and no child of an honest person can ever get into a life of crime. (Clearly he hasn’t given much thought to what happens if an honest person and a criminal have a child. Perhaps an Indian version of Two-Face? Seriously, who wouldn’t want to watch that movie?)

Here, we get our first glimpse of the theme of the film. Whether Raghunath knows it or not, his beliefs are clearly not based on biology, but on class factors. In his mind, respectable people with respectable jobs and families cannot produce criminals. Criminals come from the other side of society.

Ironically, in Jagga’s case it was the criminal justice system that turned him into a criminal, and his sole aim in life seems to be to have his revenge. So when he finds out that Leela is pregnant, he knows exactly what to do. He uses Raghunath’s own flawed belief system to destroy his life. Jagga sends Leela back to Raghunath knowing that there would always be uncertainty about who the unborn child’s biological father is. And sure enough, Raghunath, like a modern Ram, casts his pregnant wife out of his home.

Leela gives birth to a boy and names him Raj. Despite living in abject poverty, she dreams of her son becoming a lawyer and a judge some day, just like his father. She scrapes together enough money to get him a decent education in a good school. Young Raj (Shashi Kapoor) is an anomaly in his class, which is full of children from far more affluent families. His only friend is Rita (Baby Zubeida), the daughter of a rich lawyer. Raj is a conscientious young boy who is eager to do honest work to help his mother make ends meet, but he finds it difficult to balance work and school. His life completely falls apart when he reaches class late one day and is expelled, and also informed that his best friend Rita has left town. At home, his mother is severely ill and he can’t afford to buy food or medicine. The straits have never been direr. Enter Jagga, who is still not done with his ridiculously elaborate revenge plot. On a quest to prove that even respectable people can give birth to criminals, he takes Raj under his wing and leads him into a life of crime. By the time he is an adult, Raj has become a career criminal and a frequent jail inmate.

Raj Kapoor ensures that he keeps our protagonist as everyman as possible. In creating Raj, he borrowed heavily from Charlie Chaplin’s loveable tramp character to ensure our sympathies lie with him. We empathise with Raj’s ambitions of being upwardly mobile. In a revealing reflection of the times, Raj tells Jagga that he met a “political” the last time he was in jail and learnt to speak English from him. Despite working for the ruthless Jagga, Raj never seems to commit any particularly heinous or violent crimes (we mostly seem him commit petty theft). However, he is very acutely aware of his place in society, and when we do see the class struggle embodied in him erupting in acts of violence, it is particularly jarring. An especially disturbing example comes after Raj is reunited with Rita after many years and they fall in love. When Rita jokingly calls him “junglee” (uncouth, uncivilised, ill-mannered, ill-bred), he physically assaults her, twisting her arm, choking her, slapping her. Rita, despite being the one who has been assaulted, begs his forgiveness, even encouraging him to hit her some more. This bizarre scene only makes some semblance of sense if one thinks of Rita as a representation of the upper class, filled with its own version of white guilt, seeking forgiveness from the lower classes – an extraordinarily tone-deaf spectacle of self-flagellation from the affluent makers of the film.

After her father passed away, Rita was adopted by none other than Raghunath, who is now a respected judge, and she is now training to be a lawyer. Having fallen in love with her, Raj tries to leave his life of crime behind and start afresh. He gives up his swank apartment and becomes a factory-worker. However, his employer find out that he used to be a criminal and fires him. Before leaving, Raj asks him an important question: If he didn’t want to employ former criminals, did he want them to go back to a life of crime in order to survive? It is very rare for a mainstream Bollywood film to ask tough questions about the rehabilitation of criminals. This scene serves the dual purpose of exposing our society’s attitudes towards criminals, while also underlining the ability of the powerful upper class to disenfranchise and take away the means of survival of those who have less power.

Judge Raghunath is the very embodiment of this toxic mix of prejudice and power. When Rita tells him of her love for Raj, he insists on meeting him, and when they meet, he humiliates and belittles Raj. When Raj gets back home, he finds Jagga trying to kill his mother. In trying to save her and himself, Raj kills Jagga. In a stunning (and rather convenient) twist of fate his case is brought up before Judge Raghunath. Even before he has heard arguments on the matter, Raghunath has made up his mind to find Raj guilty – a clear demonstration of the unholy marriage of prejudice and power. But Rita takes it upon herself to get Raj acquitted. She asks Leela to testify to her son’s innocence, but when she reaches the court, Leela sees Raghunath from afar and recognises him. As she tries to walk to him she is run over by Raghunath’s car. When Raj hears of this, he is overcome with rage thinking that the judge has attempted to murder his mother. He escapes from prison and goes to Raghunath’s house to kill him. However, he is unable to go through with it and is arrested. And this brings us back to where the film began – the trial of Raj for the attempted murder of Raghunath.

In Damini, Govind (Sunny Deol) repeatedly asserts that the judicial system has become a pawn in the hands of the rich and powerful. In Awara, this is demonstrated. Raghunath, referred to throughout the film as “Judge Sahab”, comes from a wealthy family and benefits from all the privileges that come with it. As a judge he gains power over people’s fates, but he is human, and like many humans, he harbours irrational prejudices that warp his sense of justice. He sits in judgment from atop an ivory tower completely ignorant of the harsh realities of living in poverty and squalor. The big question Awara asks is can you truly judge someone of being guilty of a crime if you can’t understand the circumstances that made her/him a criminal? 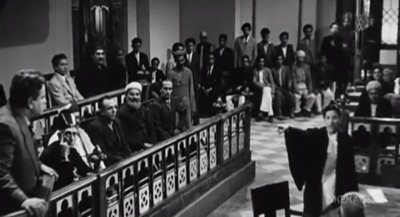 The film makes repeated references to the gulf between the law and the heart. Towards the end of the film, Rita asks Raghunath: “Kya ab bhi aapka dil use beta maanne ke liye taiyar nahin? (Is your heart still not ready to accept the fact that that this is your son?)”. The presiding judge says, “Rita Devi, kanoon dil ko nahin manta. (Rita Devi, the law does not recognise the heart.)”, to which Rita replies, “Janaab-e-wala, dil bhi kisi kanoon ko nahin manta. (Your honour, the heart also does not recognise any law.)” The film seems to say that the courts can be heartless and cold because the people who are given the job of dispensing justice often come from a privileged section of society that divorces them from the real world, rendering them incapable of having genuine empathy for those who are not like them.

However, does this mean that Awara is purely a polemical exercise in denouncing our criminal justice system? Not really, because, in the end, Raj’s trial has possibly the most just outcome. He is found guilty of attempting to murder Raghunath, but given the singular circumstances and the history of the people involved, the court sentences him to only three years in prison. Even Raj agrees that this is fair, that he must atone for what he has done. While many Hindi films would have acquitted Raj entirely, Awara takes an uncommonly fair and even-handed approach to the case. In the end, the court climbs down from its ivory tower and justice is done.

(Sayak Dasgupta wanders around myLaw looking for things to do.)