In the eleven months between December, 2013 and October, 2014, of the thirty Supreme Court judges in office at the moment, eleven will turn sixty-five and retire. Unsurprisingly, due to the staggered increase in the strength of Supreme Court judges from eight to thirty-one since 1950, this is the highest rate of retirement in the history of the institution by number. Even in terms of percentage (approximately thirty-seven), the proportion is among the highest for any equivalent period (including resignations and deaths in office). 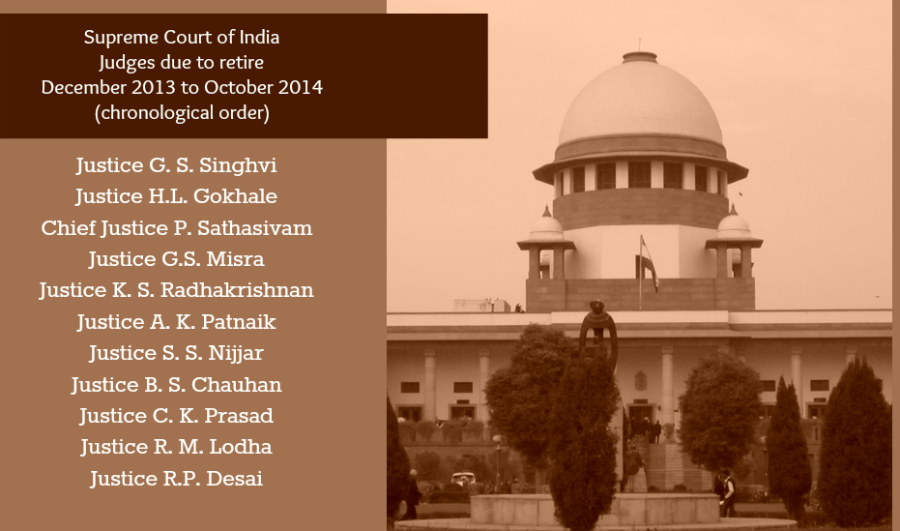 These eleven judges currently preside over all but four of the fifteen benches of the Supreme Court.

Following the convention of seniority, we should expect three judges to hold the office of Chief Justice over this period — the incumbent Justice P. Sathasivam, followed by Justice R. M. Lodha, and then by Justice H. L. Dattu.

While their sheer number makes these changes significant, it is difficult to speculate if they will lead to a change in the institutional character or overall judicial policy of the Supreme Court. Even in administrative and procedural aspects of Supreme Court practice, where the Chief Justice has discretion, due to the relatively short terms of the individual office bearers, it is tough to consistently implement new policies over a reasonable period of time and assess results.

If the Judicial Appointments Commission starts to function during this period, it will provide an opportunity to analyse what rules and conventions it creates for itself, and how it follows them.

From the lawyers’ perspective, there will be some uncertainty about the fate of cases listed for final disposal or regular hearing before particular judges, if arguments in such cases are expected to take more than a week or two, for instance. The quick succession of retirements will pose a serious logistical challenge, particularly to ensure that part-heard cases do not have to be re-argued ab initio before a new bench due to unforeseen circumstances, and that judges have sufficient time to deliberate and write detailed judgements, where necessary. There may also be cause to be wary of cheeky requests for adjournment not explicitly intended to avoid a case being heard before a particular judge!

One may wonder: why do judges retire? Why at 65? Why do they not have the option of continuing as long as they are physically and mentally fit for the role? In theory, Article 128 of the Constitution provides a mechanism for a retired judge to sit and act as a judge of the Supreme Court. In practice, this provision may just as well not exist. 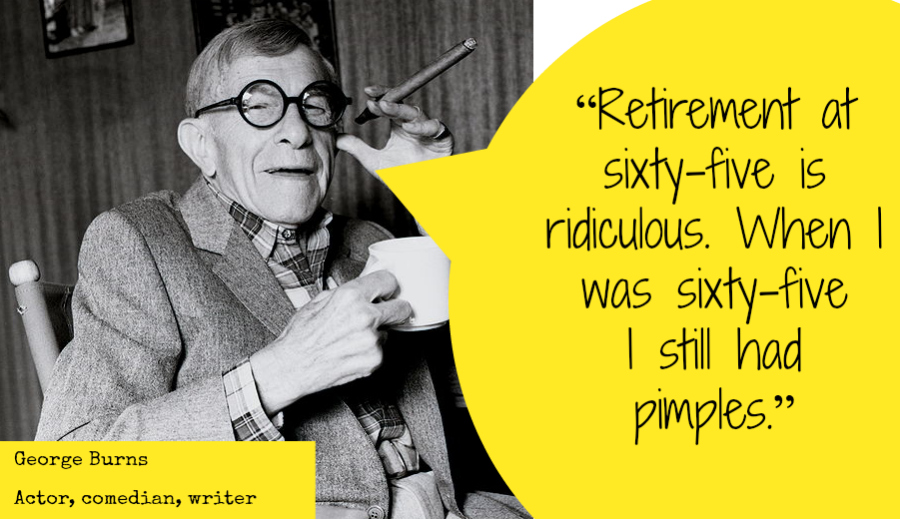 The idea that judges should retire is neither universal nor consistently followed across the world. For instance, appointment to the United States Supreme Court is for the lifetime of the judge (unless a judge resigns or is removed upon impeachment). 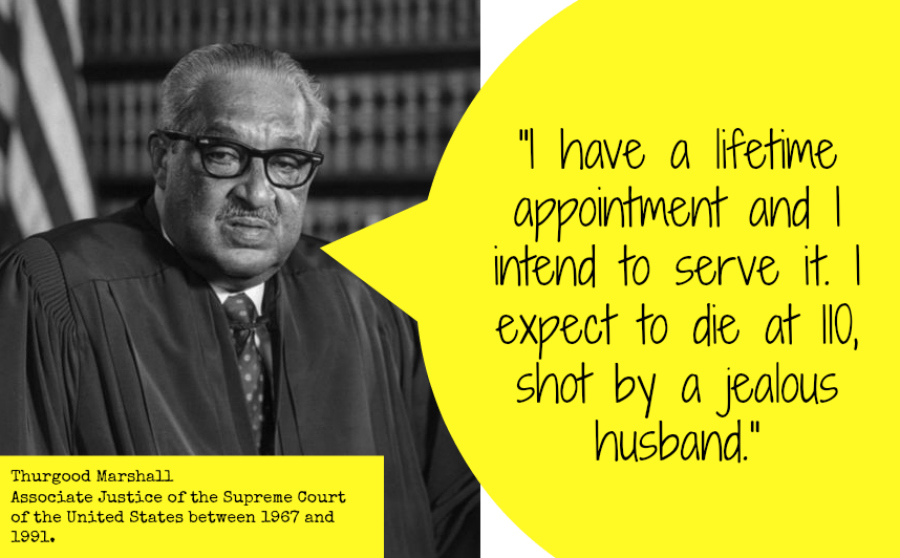 A general argument may be raised that not having an age of retirement allows too much power to an individual judge over a long period of time, and, therefore, change is necessary. There may even be a chance that a judge may wish to continue in office without being physically or mentally fit for the role. On the contrary, in India, where the Supreme Court does not sit en banc, the power that an individual judge has, may be limited in practice. The risk of a judge wishing to stay on the bench for the sake of it may be speculative.

In the respective courts of last resort in many other countries, such as the U.K., Australia, and Canada, retirement ages of judges range between seventy and seventy-five. The Justice Venkatachaliah report (2002) recommended sixty-eight as the age of retirement of judges of the Supreme Court of India. The issue of the appropriate age for retirement of judges was discussed at length in the Constituent Assembly Debates as well. Though he eventually agreed with sixty-five in 1949, an excerpt from Jawaharlal Nehru’s speech is a good starting point for the debate:

“This business of fixing age-limits in India in the past was, I believe, governed by entirely the service view. The British Government here started various services, the I.C.S. which was almost manned entirely by Britishers and then later on some Indians came in, and other services. The whole conception of Government was something revolving round the interests of the services. No doubt, these services served the country; I do not say anything against that. But, still, the primary consideration was the service and all these rules were framed accordingly.

…With regard to judges, and Federal Court Judges especially, we cannot proceed on the lines of the normal administrative services… A young man may be exceedingly good, an old man may be bad. But the point is if an old man has experience and is thoroughly fit, mentally and otherwise, then it is unfortunate and it is a waste from the State’s point of view to push him aside, or force him to be pushed aside, and put in some one in his place who has neither the experience nor the talent, perhaps. We are going to require a fairly large number of High Court Judges. Of course the number of Supreme Court Judges will be rather limited. Nevertheless, there are going to be more and more openings, and the personnel at our disposal is somewhat limited.”

Today, if there are more cases than what a thrity-one-strong Supreme Court can decide in a reasonable amount of time, and there are judges who will be of retirement age or older but are able and willing to serve, at the very least, both thrity-one and sweet sixty-five merit a rethink.

One reply on “Sweet sixty-five”

Dear Aditya, Hello
I am a British citizen of Indian origin. I work as an airline pilot. I am a senior citizen but not yet retired – couple of years to go.
I was reading your article “Sweet Sixty Five”. I am impressed with the logical information you have given that any one would like to know. To do this one needs to be a above the average. It is not about the language or the website that I am talking about but about your vision which is displayed outstandingly. Well done ! You have my blessings ! You will sure do well in life and reach greater heights than Soli Sohrabjee or MC Sitalvad.
It is also NOT about the position that you may achieve but the what you will give to our country as a legal luminaire specially when we are aware of the deep rooted corruption of all kinds in the system.

I have never heard of a Policeman or a judge in England taken a bribe and left the criminal. I feel shocked and humiliated being an of Indian origin when I hear things like sexual favours in higher judiciary.
It is a difficult subject to handle. Remain clean, fair and honest, people will treat you as God ! If you look left and right among your colleagues – you will get the answer yourself what I am talking about.
Do not emulate your seniors they have no example to set. Most of them have manipulated their positions. Most of them think about money and money alone. Money will never buy you your own satisfaction ! or ultimate happiness ! You are on the right track. Keep it up !
Best wishes and God bless you.
Capt BK Chaudhary
From United Kingdom