Late in the morning on an autumn day, a group of villagers had gathered under the shade of huge Mahua tree for a meeting called by Hemant, a community extension worker associated with a local NGO who had developed a great rapport with the villagers over the years. He was there to discuss the latest set of government schemes that had been declared specifically for tribal areas.  Tea and biscuits arrived and he spelt out the details.

He was a bit confused. Otherwise a vibrant and spirited gathering, the villagers were pensive today. Keeping his papers aside, he asked if there was a problem. After a few murmurs, Laxmi, who was usually a quiet one, spoke up. The Sub Divisional Magistrate (“SDM”) had visited their village yesterday with a representative from a large mining company and other government officials from the revenue and forest departments.

“So”, asked Hemant, “what did they say, why were they here”? Restless, Laxmi got up from his seat and said, “Brother do you see that Jhirmiri hill range? Remember we have climbed it so many times to reach the origin of the Jhirmiri stream? Where we have eaten so many wild foods? The SDM said the mining company had received a contract to extract iron ore from there and that we need to call for a gram sabha (village assembly) to give our consent.”

What is a gram sabha?

Hemant was puzzled and asked if the government officials had told them why they want the gram sabha to be called and if they had given any documents to explain the circumstances. Kishore promptly got on to the cycle and rode off to the panchayat office located about ten minutes away to get the document. While waiting for Kishore to return, Hemant began to explain what he knew from his understanding of the legal procedures.

Under the Constitution of India, a gram sabha is a “a body consisting of persons registered in the electoral rolls relating to a village comprised within the area of a Panchayat at the village level.” He added that the tribal hamlet they were all part of was one of five hamlets that were part of the village panchayat, that is, the local self government.

In fact, the Scheduled Tribes and Other Traditional Forest Dwellers (Recognition of Forest Rights) Act, 2006 (“FRA”) elaborates the definition of the gram sabha. It is “a village assembly which shall consist of all adult members of a village and in case of States having no Panchayats, Padas, Tolas and other traditional village institutions and elected village committees, with full and unrestricted participation of women.” So the full gram sabha of the panchayat is actually all the people who belong to that panchayat, including the hamlets, which are called by different names, like padas or tolas, in different parts of the country. 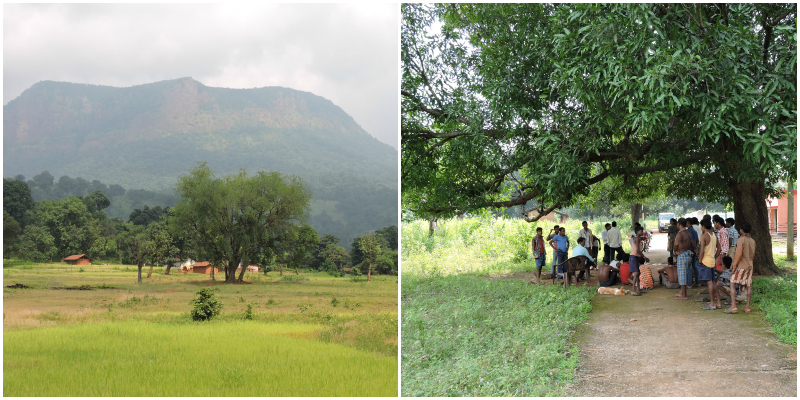 (Left) A hillock in Orissa where mining has been proposed and (right) a meeting, similar to the one described in the article, in progress. Both photographs are by Kanchi Kohli.

Why was the gram sabha being called?

In recent years, the role of the gram sabha has been recognised under different laws, which have a bearing on the transfer of land for a mining operation, industry, or an infrastructure project. “It needs to be understood”, Hemant explained, “under what law the gram sabha is being called”. The villagers were clueless.

He knew at least three critical laws under which the consent of the gram sabha is prescribed. The SDM may have come to the village to satisfy any of these processes.

The first, he said, was the Panchayat Extension to Scheduled Areas Act, 1996 (“PESA Act”). The Jhirmiri Hills are among the tribal areas that have been defined as Scheduled Areas under Clause (1) of Article 244 of the Constitution. In addition to the environment, forest, and land acquisition related safeguards prescribed under specific laws, these areas have specific constitutional protections. Under Section 4(i) of the PESA Act, the gram sabha needs to be consulted “before making the acquisition of land in the Scheduled Areas for development projects and before re-settling or rehabilitating persons affected by such projects in the Scheduled Areas.”

“But Hemant bhai”, remarked Kusum, “the SDM was mentioning something about a consent. He did not use the word consultation. So are you sure it would be under the PESA?” Even as Hemant was thinking about explaining the requirements under the FRA, Kishore returned with the sheet of paper, which the SDM had brought with him. A loud reading of this hand written notice revealed that the government officials and the mining company representatives had come to the village hamlet asking the residents to call for gram sabha to give their consent for the diversion of forest land for mining purposes.

“Ah!”, sighed Hemant, “this is how they are implementing the circular of the Ministry of Environment, Forests and Climate Change dated August 3, 2009.” He explained that the FRA is a law through which individual and community rights of people over an area of forest has been recognised. The process of diversion of the same forest land for a non-forest use such as mining however, is determined under another law, the Forest Conservation Act, 1980. While the FRA is implemented under the Ministry of Tribal Affairs, the Ministry of Environment, Forests and Climate Change is the holder of the FCA and the August 3, 2009 circular.

“The SDM had come to you because your forest rights are still under process and the 2009 circular clearly states that the forest land cannot be given to this company till the process of recognition is complete and the gram sabha consent has been received.” “Oh Ho!”, said Kusum, she signaling to the hillock in the backdrop. “Looks like the hand written letter that they have given us is to reduce the consent process to a mere administrative tick off for Jhirmiri hills! This is totally unacceptable, Hemant Bhai”, she added.

So how should the village respond?

“Yes. It is important for all of you together across the main revenue village and the five hamlets to understand the repercussions of this before you call the gram sabha.” He also told the villagers that the requirement for consent was also part of the Right to Fair Compensation and Transparency in Land Acquisition, Rehabilitation and Resettlement Act, 2013 which was recently diluted through an ordinance awaiting parliamentary approval.

While this law did not mention gram sabha, it had required the consent of seventy to eighty per cent of the affected people in the case of acquisition of land for public-private partnership projects and private sector projects respectively. He promised that he would explain that procedure to everyone the next time he was in the village. However, he left behind the photocopies of the bare text of the law with Kusum, Laxmi, and Kishore who promised to try and read it.

All the villagers gathered there realised that the gram sabha was being called by the SDM to ensure that he can send a report to the MoEFCC, stating that the villagers have no objection for the mine to start, that they either stake no rights or claims on the forests or that would be agreeable to receive ‘compensation’ in return.

They were now clear what to say to the SDM when he returned the next day. None of them wanted to give up their thriving agricultural practice and the livelihoods dependent on the Jhirmiri Hills. Moreover, “this was home”, as Kusum said. “Why would I want to just get up and leave just because someone want to dig underneath and around? Consent can’t be constructed like this!”

Hemant heard the discussion, smiled and decided to leave. The bag full of forms meant for a loan subsidy scheme did not seem to matter today. He knew he had a target to achieve, and would come back in a couple of days when the mood was different. Today, the people of Jondhia Pada of Kaskala Panchayat living around the Jhirmiri Hills had a different engagement with the state.  When larger questions of constitutional powers, rights related to consent, and questions around displacement were at stake, an income generation scheme could surely wait.