A seven-member committee of the Law Commission of India led by its Chairman (retired) Justice A.P. Shah, has recommended an amendment to the Hindu Adoption and Maintenance Act, 1956 (“Act”). This amendment would direct the family of a man to protect and maintain his Hindu wife if he cannot do so himself due to physical, mental, or any other kind of disability.

The matter was referred to the Law Commission by the Punjab and Haryana High Court after the case of Avtar Singh v. Jasbir Singh, RSA No. 29/1988. In that case, the wife of a man of unsound mind had sought, as maintenance, a one-fourth share in the land belonging to the family. Initially she was given the share through a settlement effected by the village Panchayat but was later driven out of the land by her father-in-law.

In passing his judgment, Justice Paramjeet Singh noted “In such a situation, the wife should be deemed to be dependent upon the father-in-law and entitled to maintenance as provided under Section 19 of the Hindu Adoptions and Maintenance Act.”

The panel has recommended the following insertion in Sub-section 4 of Section 18 of the Act, as: “Where the husband is unable to provide for his wife, on account of physical disability, mental disorder, disappearance, renunciation of the world by entering any religious order or other similar reasons, the Hindu wife is entitled to claim maintenance during her lifetime, from members of the joint Hindu family of the husband, except where the husband has received his share in the joint family property.”

Even before Avtar Singh, the issue had been in focus before the Bombay High Court in Ramabai v. Trimbak Ganesh Desai in which it held, “No doubt, the authorities do not show that the relations of a deserted wife are under a personal liability to maintain her; but they do show that she is entitled to be maintained out of her husband’s property to the extent of one -third of the proceeds of that property.”

In Gopala Pattar v. Parvathi Ammal (1929), the Madras High Court declared, “It is difficult to see any distinction between the position of a widow who has been obliged to enforce her charge for maintenance and that of an abandoned wife who is obliged to do the same… If she has this right against her husband personally it can be enforced by the attachment and sale of his property and that property consists of an undivided share in the joint family property.”

The proposed amendment will apply not only to wives whose husbands have a mental or physical disability, but also those who have disappeared or renounced the world by entering a religious order. The singular exception is when the husband has already received his share in the family property by way of partition.

The Committee handed over its report to Law Minister D.V. Sadananda Gowda on January 6, 2015.

Not many of you are familiar with this travesty (Malayalam link) yet. That is a circular from the Department of Local Self-Government of the Government of Kerala signed by its Principal Secretary. It encourages marriage registrars to register Muslim marriages even where the groom is less than 21 years of age or the bride is less than 18 (but older than 16) years of age, as long as (ha!) the marriage had the approval of the guardians of the bride and the groom. Quite predictably, the circular has raised a stink. See here, here, and here.

How dumb is the Department of Local Self-Government?

Did the Department not know that it was encouraging marriage registrars to commit a crime? If they did not, the Department’s pretty stupid because it is pretty clear that it is a crime for a male over the age of 18 to be the groom in a child marriage and for any person to perform, conduct, direct, or abet a child marriage.

– Under Section 9, a male adult who contracts a child marriage can be punished with rigorous imprisonment up to two years or a fine of up to one lakh rupees or both.

– Performing, conducting, directing, or abetting a child marriage are made punishable with the same penalties by Section 10.

– Similarly, Section 11 of the Act, a person (including parents and guardians) with charge of a child in a child marriage who does anything to promote the marriage or negligently fails to prevent it from being solemnised, can be punished with the same penalty. There is even a presumption that a person in charge of a child who has contracted a child marriage had negligently failed to prevent its solemnisation.

Suspecting the Department’s intelligence is obviously the more charitable view. If the Department knew that the acts above were crimes, we have to come to the view that the circular is a local revolt against the policy behind the Prohibition of Child Marriage Act, 2006.

How dumb does the Department think we are?

M.K. Muneer of the Indian Union Muslim League, the minister who also holds charge of the Department of Local Self-Government, tried to justify the promotion of child marriages.

That the Muslim personal law does not set an age requirement for the validity of a marriage has no relation to the definition of the crimes under Sections 9, 10, and 11 of the Prohibition of Child Marriage Act. The marriage may be valid but that need not stop the police from proceeding against those who have committed actions amounting to those crimes. The Prohibition of Child Marriage Act does not declare child marriages void but that is not because of any confusion about its policy on child marriage. The Act preserves the rights of the parties to the child marriage and those of the children born out of such marriages.

Section 3 however, declares that such marriages are voidable at the option of the party who had been a child at the time of the marriage. Such a person can file a petition in the district court, before attaining two years of majority, to declare the marriage void. The circular therefore, was quite clearly insincere in its selective appreciation of the Prohibition of Child Marriage Act and Registrars would be quite right to cite a fear prison time to not register such marriages. 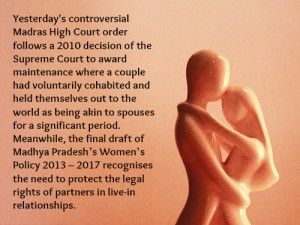