My first court visit, during an internship, remains etched in my memory. Visitor pass in hand, I entered the Supreme Court, gazing awestruck at the beautiful façade. I set out to find Courtroom Number 12. How hard could it be? Very hard indeed. It took me half an hour, during which I was even ushered out of a judges’ enclosure, and I missed the matter. I later discovered that this was a rite of passage. All my classmates had stories of getting lost in the winding corridors of court complexes.

Today, only after some months of running around the many district courts of Delhi am I able to carry myself about with a measure of certainty. I discovered many previously unknown parts of court complexes. On its face, a court is little more than the main building with many small courtrooms inside. Only when you get your elbows into work do you discover what lies beneath. Inside the courtroom itself, there is a lot that goes on beyond the interaction between a lawyer and a judge. The judge is assisted by a Reader who handles all administrative work inside the room and the Ahlmad who is charged with handling all judicial files for that court. Outside courts, areas are designated for lawyers’ chambers, and all sorts of para-legal assistance — typists to help with an application, oath commissioners for the accompanying affidavit, and copiers to get the several copies that courts require.

The library and canteen are more interesting. At the court libraries, there are lawyers deeply engrossed in commentaries and preparing their arguments, while others rush in and out looking for copies of cases in matters that are currently being argued. At the canteens, there are tables where lawyers gossip and others where the discussion is about an issue of law. 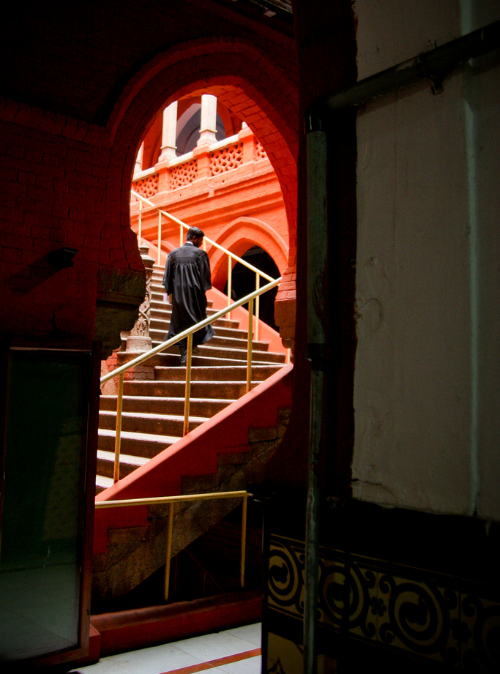 Though a very interesting one, my process of discovering courts left me with some concerns. Courts seemed to pay little or no attention to the ordinary litigant. Lawyers on the other hand, were demigods. Buildings have complex layouts with little or no directional assistance to get around. Security passes at the higher courts automatically exclude litigants without readily available identity proofs but anyone in black and white will manage to enter them unchecked. The bureaucratic dependence on files breeds corruption by creating more palms to grease for any work that needs to be done. Given the scale of the problem, it seems the common litigant can only hope to snigger and chip away, one date at a time.

Courts would certainly benefit from fresh ideas, but where will these come from? A university is the best place for the germination of fresh ideas, but law students are afforded little or no opportunities to familiarise themselves with the problem. Most students only get an opportunity to attend court during internships. But in those few weeks, there is rarely time to explore the court. More exposure to the court would also allow students to make better decisions about their careers.

(Abhinav Sekhri is an advocate practising in Delhi.)

Well, it is again advocates who can bring about the change. From parking of vehicles, keeping files and attending clients, if professionalism is strictly induced hope for change exists. Otherwise with present day approach of indifference, lack of professionalism will make the system deteriorate further.

I think that’s a very narrow view of courtrooms.

anyone in black and white goes in unchecked ? in delhi ? in higher courts ? ( am assuming you are referring to the high court / Supreme court) in my experience, that does not happen.
if it does, then probably, the security guys recognize the person entering and see him as low risk, low enough not to pat search. any other reason, – thats a breach of security protocol. i myself have entered appellate courts and there is a search.

you should inform of unacceptable breaches to the security office. –

for the trial courts, it is next to impossible to have a proper check of people going in and out. maybe that is one reason why the security is lax. low risk target maybe. maybe thats why cops dont take it that seriously.

Why are litigants relatively barred from higher courts ? well, for that you would need to go back in time to when they were not barred.
The poor infrastructure- in terms of building spaces, litigants+ lawyers+support staff just simply cannot accommodate all of them. It simply cannot.
When the security was tightened, albeit for other reasons, and the number of litigant reduced, it greatly made commuting easy in the high courts an supreme court.

If I remember correctly the registrar, supreme court has also barred interns from specific court rooms.

When I started trial courts, and I dealt with the court staff, there was a air of competency that flowed from wearing that black and white, (even though I knew nothing at the beginning) Later I realized, this is because, the court staff when dealing on a regular basis with the lawyer’s staff, would at one level, see that the lawyer as the final authority as opposed to the lawyer’s staff and automatically give him more respect, than any other participant- i.e. – support staff, or even the litigants. Remember, the lawyer is the one who deals directly with their boss – the judge. Demigod – too many lawyers, too few visits to come to that conclusion ? personally, never been treated as one. 🙂

The first few months, or even as an intern, when you are not fully committed to practice or know what court rooms are like, would definitely make you feel lost. more so, since law school focus a lot on substantive law and far less on court procedures.

but as you gain experience, you realize that there is a kind of a synergy between what is taught and what happens in a court room.

and oh yes, palm greasing is something that you don’t learn in a law school.