The past year has seen some key developments in the further evolution of the SEBI’s powers, with the promulgation of the Securities Laws (Amendment) Ordinance, 2013 (“the 2013 Ordinance”). We have discussed the implications of the 2013 Ordinance and its lapse here, here, and here.

The Securities and Exchange Board of India (“SEBI”), which was established in 1988, received statutory powers from April 12, 1992 with the enactment of the Securities and Exchange Board of India Act, 1992 (“SEBI Act”). Now, the Securities Laws (Amendment) Ordinance, 2014 (“the 2014 Ordinance”) has been notified with effect from March 28, 2014. It makes effective, the additional powers granted by the 2013 Ordinance. This provides much-needed continuity for the SEBI’s regulatory actions.

However, the 2014 Ordinance contains some notable variations.

The 2014 Ordinance introduces a new provision — Section 15-I (c) — to the SEBI Act. It allows the SEBI to supersede an order issued by an adjudicating officer, if it feels that the order is erroneous. The term “erroneous” is linked to whether the order is in the interest of the securities market. The provision also contains the following limitations to the exercise of this power:

– The SEBI can exercise this power only within three months of the adjudicating officer’s order, or the disposal of an appeal from that order by the Securities Appellate Tribunal; and

– The purpose of such an inquiry can only be the enhancement of the penalty imposed by the adjudicating officer.

So, this new provision adds a new layer to the appellate hierarchy for the orders of adjudicating officers under Section 15T of the SEBI Act.

The reasons for introducing this new provision are hard to determine. The current provisions in the SEBI Act and the corresponding rules are aimed at providing independence to the adjudicating officer, particularly where the penalty is concerned. Since the investigating arm of the SEBI presents the case before the adjudicating officer, it seems odd that the SEBI itself can then call the penalty imposed into question.

No search and seizure without recorded reasons 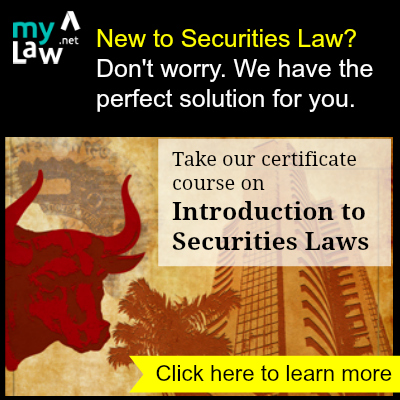 The 2014 Ordinance has an additional requirement in the provision amending Section 11C of the SEBI Act. Now, the Chairman can only conduct search and seizure operations “after recording the reasons thereof in writing”. This additional clause provides a check against the misuse of search and seizure powers and emphasises the Chairman’s responsibility to ensure that such invasive measures are authorised only in necessary circumstances.

Assistance from the police

With the introduction of Section 8A in the SEBI Act, an authorised officer (that is, the investigating officer) can “requisition the services of any police officer or Central Government officer or both” to assist in search and seizure operations.

These additional provisions in the 2014 Ordinance may not remain when new securities laws are finally enacted by the Parliament. The use of these powers by the SEBI in the interim could possibly determine their final form.

One reply on “The Securities Ordinance: At round three, some notable variations”