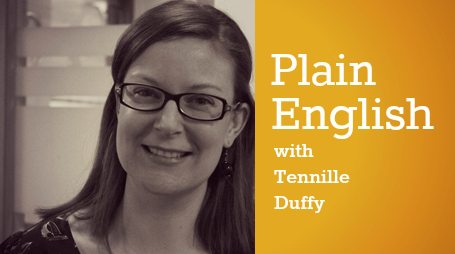 “As stated heretofore, the landlord’s conduct created, caused, and resulted in serious bodily harm and massive injuries, to wit: a broken and mangled left leg, lacerations to the aforementioned leg, and several broken digits on the foot attached to said leg, in witness whereof was the spouse of the injured party.

We all know legalese when we read it or hear it. It is full of long and complex sentences, the use of two or three words when one would do, and technical, foreign, or complex words.

You might think that the one above is a fairly typical legal sentence — and note that it is a single, long sentence. Many of you might even think that this is a good sentence. Some of you might even be pleased to have drafted such a sentence because it sounds lawyer-like and appropriately serious. But let’s ask ourselves a few questions. What is actually being said? Can it be understood the first time it is read? Can it be properly understood by someone who is not a lawyer? Is it pleasant or easy to read? And finally, putting all of these ideas together – is this the best way of writing what the writer is trying to communicate?

This sentence very clearly demonstrates the problems that the use of legalese creates. The use of overly formal and unnecessarily legalistic language creates a barrier between the writer and the reader. It conceals what the writer is trying to communicate behind a screen of useless words and too many clauses. Yes, it may sound lawyer-like or serious, but that is only because the expectation persists that lawyers work and write in a world that no one else can understand or have admission to. That, I would suggest, is an out-dated and unhelpful view. 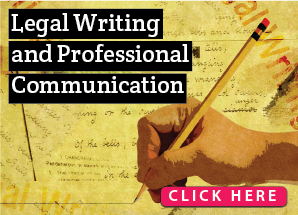 As lawyers, our job is to help our clients. It is as simple and as complex as that. We are hired for our knowledge and expertise in the law, and for our ability to apply an analytical mind to all kinds of problems. Primarily, however, our most important skill is that of communication. It is no good having an encyclopaedic knowledge of the law or an incisive legal mind if we cannot effectively persuade a judge, negotiate with an opposing lawyer, or explain the likely outcome of a case to a client.

In all of the things a lawyer does—whether drafting contracts, advising clients, or appearing as an advocate—communication is key. This is something that no one can really argue with. Whether in written or oral form, good communication is characterised by succinct and clear expression. This is because when we communicate, we want the person we are communicating with to understand us first of all. As lawyers, we often want that person to be persuaded by what we are saying as well, but that can hardly happen if that person doesn’t really understand us. Right now, too many lawyers are simply beating their clients into submission with a heavy vocabulary, or engaging in some kind of chest-puffing verbal one-upmanship in the courtroom. As lawyers, it is time to put our egos away, along with the ye olde English and Latin dictionaries, and make sure that we are being understood. The rest will follow.

Have you heard of ‘plain English’?

It’s not really something that is spoken about much in relation to the law in India, nor taught in most Indian law schools. But if you’re doing one of the programmes on myLaw.net that involves writing or drafting skills, then you have heard of it. You might have experience in the use of plain English if you’re a lawyer who has worked overseas in a jurisdiction such as the U.K. or the U.S.A. But for the majority of Indian law students and lawyers who think that legalese – the use of terms like “heretofore” and inter alia – is an essential element of legal writing, I’m here to convince you otherwise.

Over the coming weeks, I’ll be tackling some of the most common questions about plain English or plain language, and objections to its use, that I have come across in my time working both here and in Australia. I invite you all to consider my arguments, contribute to the discussion, ask any questions, and in the end, tell me if I’ve convinced you to change the way you write!

(Tennille Duffy is part of the faculty on myLaw.net.)

2 replies on “The problem with legalese”

The development of the Anglo-Saxon Jurisprudence, inseparable from the Roman Law, has been the function of Royal Courts, and Scholars. The medieval ideas of class difference were deeply rooted in the minds of the lawmakers. The purpose of making the language of the law difficult was twofold: to achieve exactitude of meaning on the one hand, and to confine the legal matters to the ruling, and learned, class only. It would not only do to substitute legalese with plain English, one must redraft whole Acts and if need be, whole jurisprudential body of doctrines in simple, plain, yet unambiguous language. Clarity of meaning and ease of understanding should be the only norms for such redrafting.

A nice article, a need of the times.

Thanks Renukadas, I agree with your comment that this is “the need of the times”.

Look out for future posts where I’ll write a bit more about some of the efforts going on in jurisdictions around the world to draft legislation and rules in plain English!