In April 2013, the Kasturirangan Committee constituted by the Ministry of Environment and Forests (“MoEF”) submitted its report on the Western Ghats, sparking much political debate about the fate of this mountain range, which runs parallel to the western coast of India, almost contiguously from the lower reaches of Gujarat to the tip of the Indian peninsula. A unique geological and ecological marvel home to the greatest concentration of biodiversity in the world, hosting about 325 globally threatened species in an area roughly forty-three times the state of Goa, they are a UNESCO World Heritage Site and a key component in regulating the south-west monsoon cycle that forms the basis of the subcontinent’s rainfed agriculture. Not only do they provide a natural barrier to the rain-laden winds, the topography of the Ghats has, over millennia, become the natural habitat for thousands of species of flora and fauna that live in delicately balanced ecosystems throughout the ranges. As the Kasturirangan Committee report accepts, only concerted efforts to study it over decades will provide a full appreciation of the value of this exceptional phenomenon. 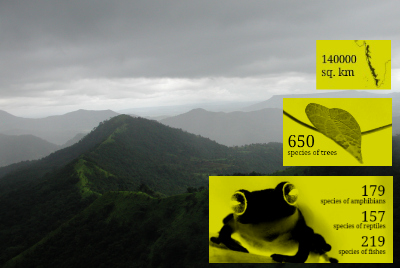 Given that it spans the six states of Gujarat, Maharashtra, Goa, Karnataka, Kerala and Tamil Nadu, it is vital that state governments and the Union government work with each other to preserve this unique ecosystem. Remember, that since the protection of wildlife and the regulation of forests are subjects in Entries 17A and 17B of the Concurrent List of Schedule VII of the Constitution of India (“Constitution”), the Union and the State governments have to co-ordinate conservation efforts.

The WGEEP had been required to “demarcate ecologically sensitive zones and suggest measures to conserve, protect and rejuvenate the ecology of Western Ghats region.” Based on the feedback of the different stakeholders and the recommendations of the Gadgil Committee Report, the MoEF constituted a High Level Working Group to provide suggestions for “an all-round and holistic approach for sustainable and equitable development while keeping in focus the preservation and conservation of ecological systems in Western Ghats.” The HLWG was headed by Dr. K. Kasturirangan and it came out with the Kasturirangan Committee Report.

What is the debate all about?

The western region of India has traditionally had a high density of human population. In recent years, monoculture plantations (such as spices and bananas in the Kodagu region of Karnataka), poaching, and livestock grazing have added to the pressure on the land. Over the last two decades, mining and extraction of sand, in particular, have led to large-scale degradation in places like Goa, where the mining industry contributes a major chunk of the state’s revenues. This ever-increasing threat and the need for sustainable solutions prompted the Union government to institute the Gadgil and subsequently, the Kasturirangan committees. Both sets of recommendations have run into rough weather.

The Kasturirangan Committee report recognised that almost 60 per cent of the region of the Western Ghats is under human habitation, leaving only about 37 per cent of it – close to 60,000 square kilometres in area – under uninhabited forest cover. The report recommended that all such land be declared an Ecologically Sensitive Area (“ESA”) and that a prohibitory and regulatory regime be implemented in ESA regions including a complete ban on mining, quarrying, and sand mining. Obviously, this has attracted a lot of political debate and is now the subject of negotiations between the Union and the state governments that will be affected if this recommendation is to be legislated.

In a bid to strike a balance between conservation efforts and continued sustainable human development, the report also recommended incentivising green growth and proposes spurring growth of the inhabited regions of the Western Ghats through grant-in-aid projects funded by the Union Government. It envisaged increased expenditure by the Union government towards state debts in a way that will boost the productivity of forest-reliant livelihoods.

“This is a mechanism whereby part of the outstanding debt of a State is swapped for new constructive initiatives by it to protect its natural resources. A part of these payments be retained by the State Governments and a part be used to finance local conservation trust funds (as in several countries), which disburse grants to community projects for improving forest productivity and ensuring sustainable forest based livelihoods in ESAs.”

While the idea of sustainable economic development is a good one in theory, considering the amount of pressure that is already exerted on a fragile and fast-shrinking ecosystem, it may not be the most pragmatic approach. The report in fact follows through to propose two extreme and contrasting views. At one end of the spectrum are the strictly regulated and cloistered regions under the ESA category with zero-tolerance for any human activity. At the other end, the rest of the Western Ghats are under threat of turning into an open forestry industry, where almost every environmental resource is potentially tapped for its economic value.

In its report, the Gadgil Committee had recommended the stricter monitoring and implementation of the applicable environmental laws to maintain and possibly achieve, a greater level of conservation of the Western Ghats. Seeing how these would be difficult to achieve, the Kasturirangan Committee broke the area down into components. Madhav Gadgil’s open letter to Dr. Kasturirangan was scathing; he said the latter set of recommendations would result in “maintain[ing] oases of diversity in desert of ecological devastation”. 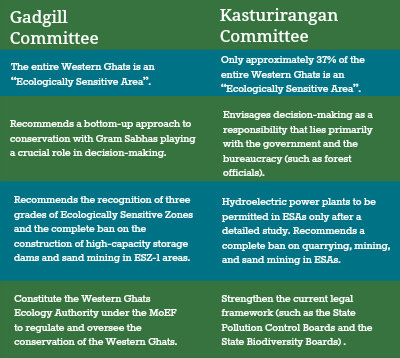 The precautionary principle, first articulated in Principle 15 of the Rio Declaration of 1991 (“Rio Declaration”), demands the exercise of caution in carrying out human activities, the effect of which on the environment are not clearly known at that time. This principle has been a part of Indian law since the Supreme Court emphasised the need for scientific inputs before decisions could be made regarding the environment in A.P. Pollution Control Board v. M.V. Nayadu. It recognises the need to protect the natural world for its intrinsic value and not just for its potential benefits for human civilisation. Our knowledge of the ecosystems and the ecology of the Western Ghats is quite limited and to base our long term decisions on our inadequate comprehension is not just an error but an example of bad governance. The principles of sustainable development, which were read into Indian law by the Court in the case of Vellore Citizens’ Welfare Forum v. Union of India, and which through the Rio Declaration, require nations to achieve developmental goals without irreversibly compromising the capacity of the environment to sustain present and future generations, are also at play.

Given the role of these concepts in Indian law, the Kasturirangan Committee failed to grasp the importance of the Western Ghats to the geography of the Indian subcontinent as well as the role they play in the lives of those who inhabit them. We need to do away with short-term solutions and focus on developing a better understanding of the region to achieve a more robust framework of laws and processes that will facilitate better conservation in the region.

(Suhasini Rao is part of the faculty at myLaw.net.)