What role does violence have in establishing a republic? Is the rule of law a peaceful one? John Ford’s The Man Who Shot Liberty Valance (1962) poses these and other questions that are fundamental to the exercise of power by the people.

Republican values arrive in the American frontier town of Shinbone through the protagonist Ransom “Ranse” Stoddard (played by James Stewart), a “youngster fresh out of law school, bag full of law books”. On his Westward journey, the idealistic Stoddard gets a taste of “Western law” when he stands up to the fearsome robber Liberty Valance (played by Lee Marvin) and is whipped to the ground. Law, he soon learns, could not subdue Valance’s terror. The town’s cowardly marshall is no match for Valance and the townsfolk seemed to prefer the protection of the gun.

The only man with the gunfighting skills to stand up to Valance is Tom Doniphon (John Wayne) who, like Valance, has a sneering contempt for the law and, like Valance, represents the frontier’s faith in the gun. “Out here”, Doniphon tells Stoddard, “a man settles his own problems”. The machismo of Valance and Doniphon is contrasted with the well-mannered Stoddard, who is washing dishes in a restaurant and is frequently apron-clad.

The key difference between Valance and Doniphon of course, lay in what they use their guns for. Valance uses violence to meet his selfish needs and those of the cattle ranchers who hire him. Doniphon on the other hand, represents righteous violence and uses his gun to protect the townsfolk.

Stoddard soon earns the town’s respect. Refusing to accept Valance’s authority, he establishes a law practice and a school to teach the illiterate townsfolk and their children to read and write.

Hallie (Vera Miles), who also works in the restaurant, is used to show the law’s attraction for the townsfolk – the promise of stability and respect for individuals in a violent world. While Doniphon woos her with presents and compliments, he does not want her to go to school. It is Stoddard who ultimately earns her affection.

However, even as the town warms up to the rule of law, Stoddard becomes a participant in the frontier’s violence. He acknowledges the threat posed by Valance and accepts a revolver from the editor and publisher of the local newspaper. Not amused by a trick played on him, he even punches Doniphon in the face.

This grudging acceptance of violence as a way of the frontier happens just as the town begins to articulate its yearning for republican values. The town wants to elect a representative to press the demand for statehood at the territorial convention but Valance, who has been hired by the predatory forces of capital – the cattle ranchers who would rather the territory remain ruled by the hired gun, threatens the fair conduct of the election. Only after Doniphon blunts the threat can the election proceed. The rule of law could only emerge in Shinbone at the point of Doniphon’s gun. 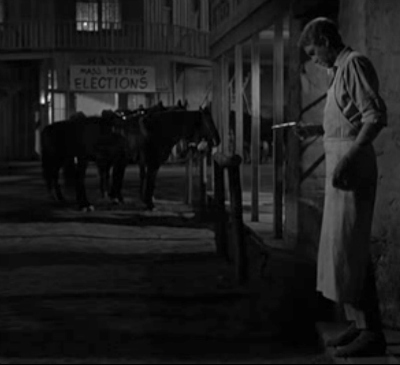 After Stoddard is elected to represent the town at the statehood convention, Valance challenges him to a gunfight and in the confrontation between them, to everyone’s surprise, it is Valance who falls dead. Doniphon’s climactic revelation [SPOLER ALERT] confirms the suspicion that it was he who felled Valance. The revelation assuages Stoddard’s conscience and he embarks on a life in politics. But the final scene reveals the endurance of the myth that it was Stoddard who was “the man who shot Liberty Valance”. The myth continued to sustain a long and glittering career in public life.

The endurance of one legend reveals the falsehood about a “fact” – the peaceful rule of law. Its moral authority may derive from popular acceptance but, like Stoddard’s political career, the rule of law had deep roots in violence.