Of all the categories of persons incarcerated in prisons, the worst are the stories of undertrial prisoners. In the widest sense, undertrials are people who have not been proven guilty, but whose innocence is yet to established. The history of the prison system is rife with tales of undertrials who have spent years and years in jail for petty crimes, usually because they are unable to pay bail amounts, or worse, because they have no access to the justice system. This situation has not gone unnoticed. In September 2014, the Supreme Court directed the release of undertrial prisoners who have spent half of the maximum sentence prescribed for the offences they are alleged to have committed.

This is not the first time that undertrials have been the focus of judicial attention, but as advocate Vrinda Bhandari pointed out, while many deeper problems remain unaddressed, releasing undertrials is only a short-term solution. The condition of the other participants in the criminal justice system (police, prosecutors, judges, and prison administrators) is a significant problem in itself, as these professions tend to be  “overworked, understaffed and underpaid”.

Some of the richest data available for analysing questions of law and policy in India relates to prisons and prisoners, through the National Crime Records Bureau, and its annual Prison Statistics India, the latest edition of which was published in October 2014. Combined with other data available from different sources, many interesting correlations can be drawn, with the usual caveats about data quality and the fact that mere correlation does not imply causation. The note focuses on state-wise undertrial populations, taking into consideration that several relevant issues are under the control of individual states, notably the police and prisons. The lack of access to the justice system and the inability to post bail suggests it might be interesting to examine two sets of intersections, between undertrial populations and first, the criminal justice system, and second, development indicators in states. Each scatterplot drawing below plots the undertrial population on the vertical axis against the other indicator on the  horizontal axis. The dotted lines indicate the median values (the value in the middle of the dataset) of each indicator and they divide the plot into four quadrants.

Undertrials and the criminal justice system

As proxies for the criminal justice system, two parameters were looked at. First, the note examined the health of district and subordinate courts, based on data from Court News (Q4, 2013). This was derived as a measure of the working strength of the courts relative to the sanctioned strength of the courts, to arrive at a percentage of how “healthy” the courts were. The hypothesis was that states with more “healthy” court systems, that is, states where district and subordinate courts were working closer to their sanctioned strength, were also the states that had lower undertrials as a percentage of all prisoners. The relationship, as the image shows, is indistinct, but might become significant if the data are studied in greater detail (which this note does not attempt). Illustratively, if health of courts and undertrial populations for each state are studied over a longer period of time, it might be possible to show individual trendlines for each state, and test for inverse trends between the indicators. 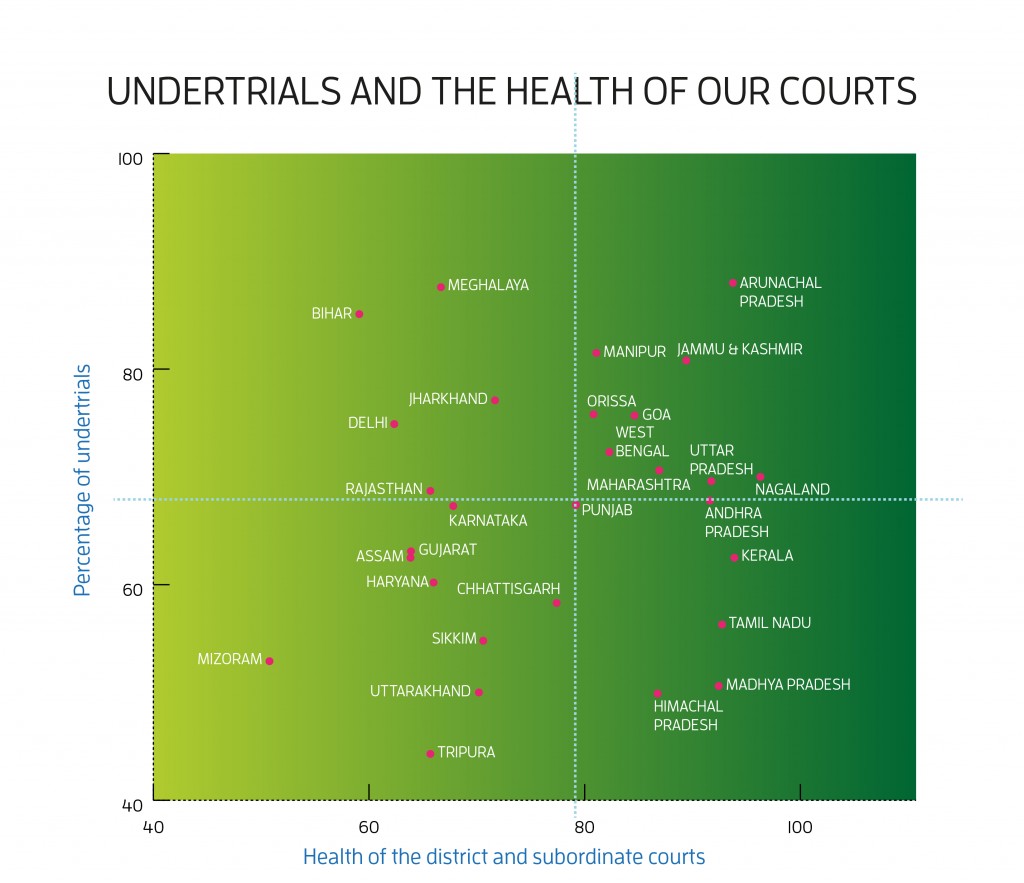 Second, the note examined the police force per 10,000 people in various states, based on data for 2011, from data.gov.in, and the population census. The police force was taken as a measure of the total armed and civilian police force in states relative to the population of the states. The analysis discounted for outliers such as states in the north-east and Jammu & Kashmir, given their special situation regarding police and law enforcement. However, there did not appear to be any correlation between the strength of the police force, and the percentage of undertrial prisoners. 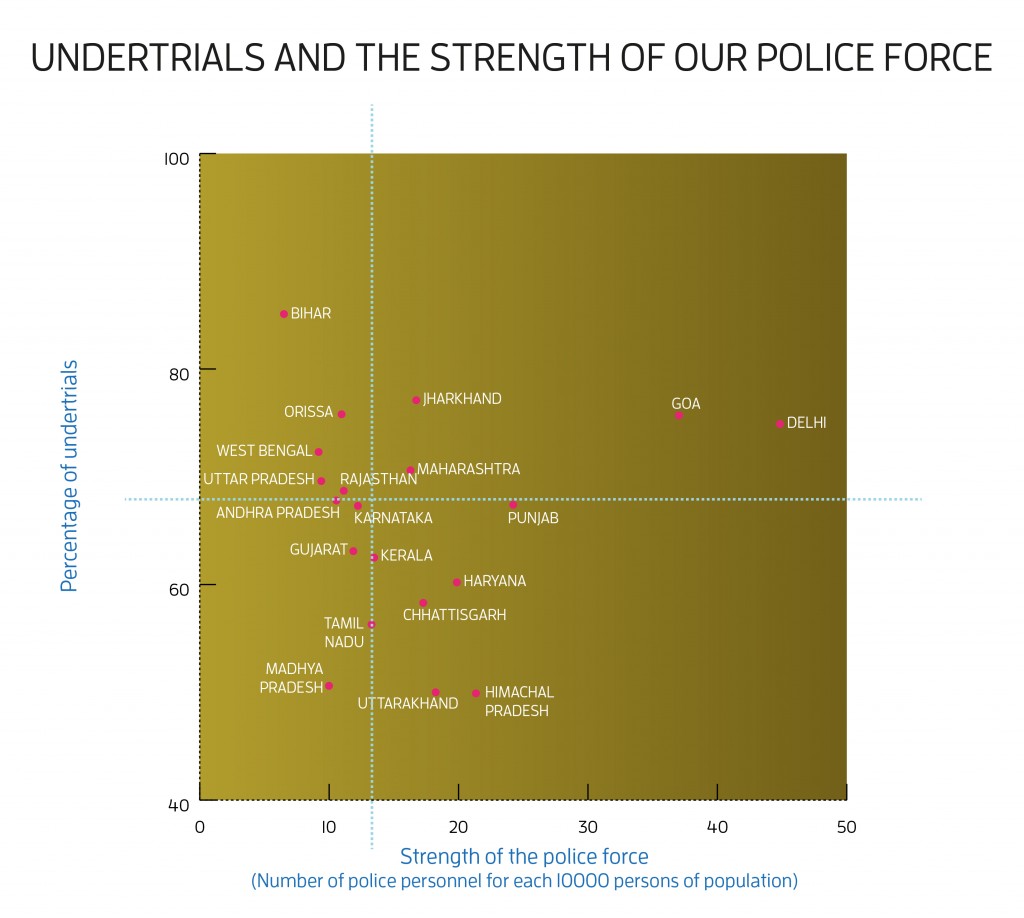 Second, the percentage of undertrials was compared with the tele-density of wireless connections across several areas in India, based on regulatory data, which was taken as a proxy for income. (Tele-density, or telephone density, means the number of telephone connections for every hundred people in an area.) Here, too, it appears that states with higher wireless tele-density tend to have a fewer percentage of undertrials in prison.

The degree of civilisation in a society, Dostoevsky is believed to have written, can be judged by entering its prisons. Could it be that society, too, has something to tell us about the prisons we create?