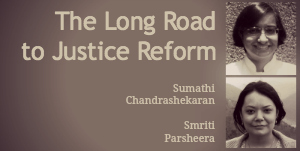 Courts in India are faced with a huge backlog of cases, leaving parties embroiled in legal battles for years, often decades, at a stretch. Many factors contribute to this problem, including procedural inefficiencies, new laws passed without any litigation impact assessment, and poor court and case management systems.

One reason however, comes to mind before any of these other reasons – the apparent inadequacy of the present judicial workforce to handle the large numbers of pending cases. While we can use the available data on the backlog of cases to estimate the number of cases that each judge would have to handle if this backlog were to be cleared in the current year, (see the first figure below) it is crucial to highlight the limitations of the available data.

We don’t really know the magnitude of the problem

Without a uniform system for indexing and categorising cases, different states have devised their own methods for recording data. As the Law Commission of India observed in July this year, some states count each interlocutory application as a separate case while others do not. Similarly, while some states exclude data on traffic and motor challan cases, most others do not. There is therefore, doubt about the accuracy of pendency figures.

An incredible number of cases pending before each judge 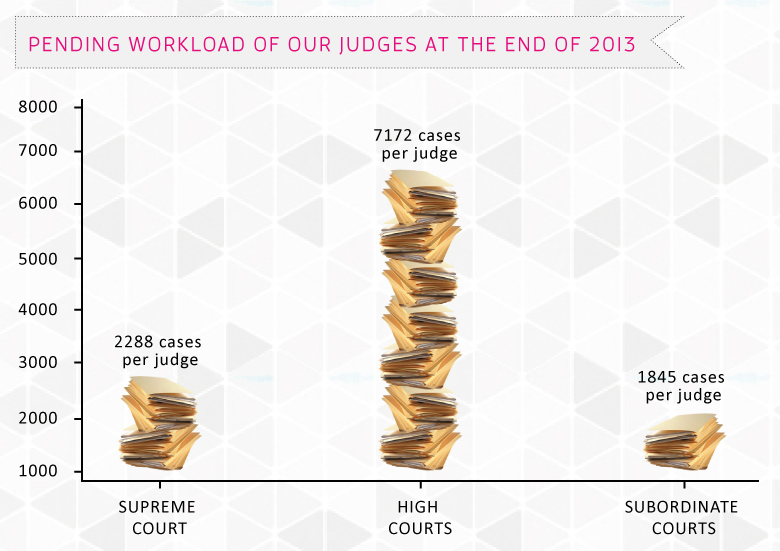 Working within these limitations, we can see that the number of cases pending for each judge is staggeringly high. High court judges, whose potential workload is over three times that of their counterparts in the Supreme Court and at the subordinate courts, seem to be in the worst position.

These numbers are based on the number of judges who are actually working, and not the sanctioned strength, which is the number of judges that are, on paper, expected to be in office. These two figures often tend to vary significantly. For example, at the end of 2013, 29 per cent of the posts in the High Courts and 22 per cent of the posts in subordinate courts were lying vacant. 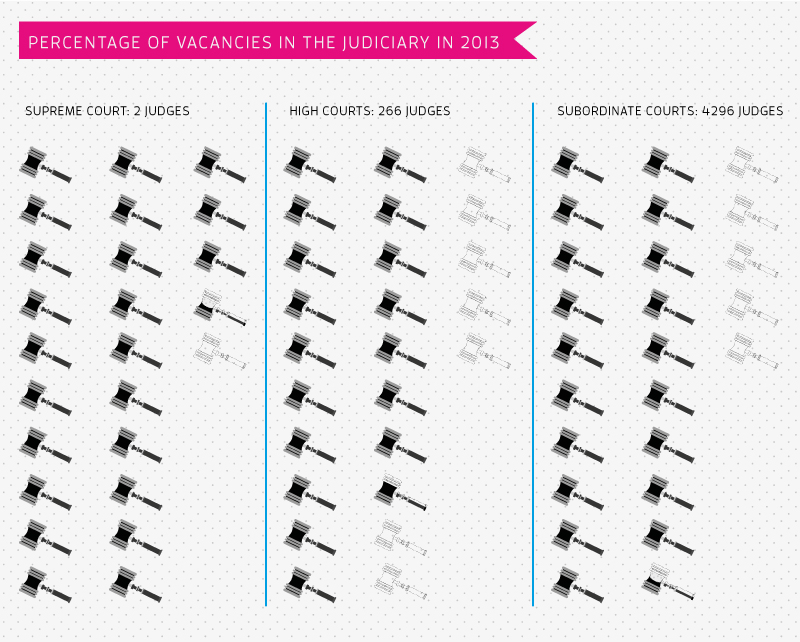 On the bright side, the numbers show a steady increase in the sanctioned strength of judges over the years, particularly in subordinate courts, where it has gone up by over 30 per cent in the last eight years. 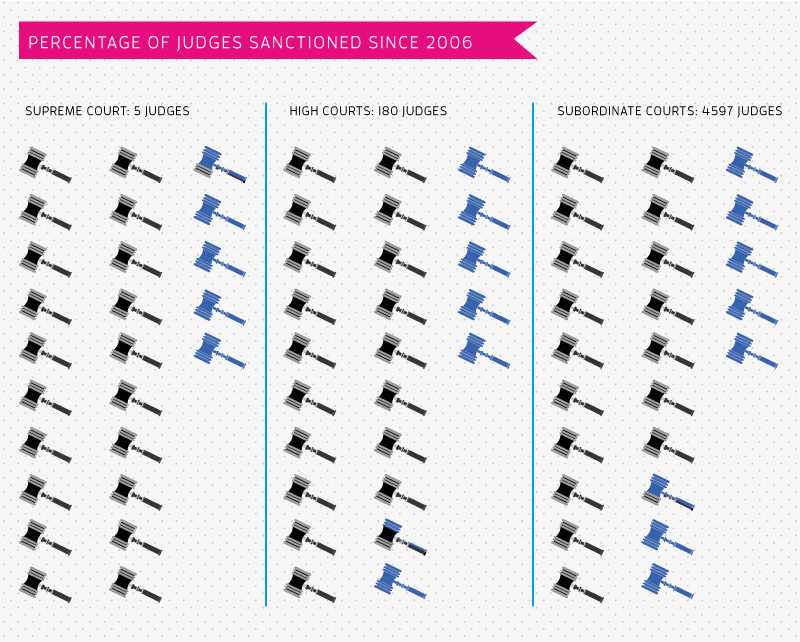 Who is responsible for filling these vacancies?

Recent debate surrounding the National Judicial Appointments Commission (“NJAC”) has focused extensively on appointments to the higher judiciary, that is, the Supreme Court and the High Courts. At present, because of the Supreme Court’s interpretation of Articles 124 and 217 of the Constitution, it is the judiciary that plays a decisive role in such appointments.

The proposed constitutional amendment and NJAC law will change this, creating NJAC as a permanent body  to recommend appointments to the President. There will also be a timeline within which the central government has to inform the NJAC of imminent vacancies, though there is no such timeline timeline for the NJAC to complete its selection and make recommendations to the President.

The Governor appoints judges and judicial officers for subordinate courts in consultation with the High Court. The State Public Service Commission also has to be consulted for judicial officers below the rank of district judges. Rules made by different states provide for the actual recruitment process – whether through promotion or competitive examination.

In 2006, the Supreme Court in Malik Mazhar Sultan identified unfilled vacancies as a key reason for the pendency problem and directed states and High Courts to evolve a fixed schedule to fill vacancies in subordinate courts. After that, the Supreme Court itself devised a detailed time schedule for the states. The High Courts were asked to oversee this process, which included timelines for the determination of vacancies, issuing advertisements, conducting examinations and interviews, declaring results, and issuing final appointment orders. Seven years on, the Supreme Court is still struggling to ensure compliance with those directions.

How many judges do we need?

In 1987, the Law Commission recommended that there should be at least 50 judges for every million Indians. For today’s population of 1200 million therefore, India would need about 60,000 judges, that is, triple the current number of sanctioned judges.

In July this year, the Law Commission changed its opinion about the judge-population ratio, observing that it was not based on any objective criteria and that it did not capture state-specific needs. Instead, it proposed calculating the additional number of judges required to deal with the backlog of cases by using the current rate at which judges dispose of cases. By any reasonable metric however, the current sanctioned strength is far less than what is required.

Any real solution to these problems requires effective cooperation between the judiciary and the central and state governments. The judiciary should urgently take the initiative in filling vacancies and the government should create additional courts and extend infrastructure support to them.

(Sumathi Chandrashekaran and Smriti Parsheera are lawyers working in the area of public policy.)

There is a theory that legislation in support of compulsory military service for those who turn eighteen is very easy to get popular support for. Those who vote on it will never be directly affected by it, and those who will be directly affected do not have a vote. Lawyers as a class do not tend to get much public sympathy either (one wonders why!). It should come as no surprise then that the debate about scrapping court vacations has been publicly characterised as “lawyers (who oppose the proposal) versus everybody else (litigants and judges)”.

Such a characterisation does not do justice to the gravity of the issue at hand. The suggestion of the Chief Justice of India is a serious one and deserves thoughtful consideration. Instead of it being a concrete debate with number and figures, what we have today are platitudes about docket backlog, interspersed with remarks about how lawyers love their vacations (they do, nothing wrong in that!) and whether they deserve them (which is the wrong question).

The correct question is about defining clear targets for the legal system to improve the pace and quality of delivery of justice. Despite its abstract moral grandeur, administration of justice is ultimately a service provided by the State. Different courts deal with different kinds of cases and have varying levels of docket backlog. Consequently, strategies to reduce case pendency have to be court-specific. From this perspective, the process of consultation initiated by the Chief Justice is a welcome step. However, if responses to the consultation process are limited to the question of doing away with court vacations, it will be difficult to assess the success of such a measure in reducing case pendency due to the absence of specific targets.

Our collective aim must be to reduce case pendency without compromising on the quality of administration of justice. The length of vacations (or their absence altogether) is only an instrument to that end. The proposal of 365-day courts is only a skeletal one at the moment, which raises legitimate concerns for advocates in particular. When can an advocate travel out of station? What would the court’s policy be on granting adjournments if an advocate is away on holiday? Will there be different standards for Advocates-on-Record? Will this make it more difficult for clients to rely on individual practitioners (as opposed to larger law firms where one advocate may be able to step in for another more readily)?

If a court-specific approach is adopted, naturally, the best place for the Chief Justice (together with the Ministry of Law and Justice) to start tackling case pendency will be the Supreme Court. Numbers and figures of case pendency for the Supreme Court are relatively easily accessible. The next step in the debate should be to identify the kinds of cases which merit priority (for instance, criminal and matrimonial cases), and publicly communicate statistically achievable overall targets of case disposal in the short and medium-term.

If meeting these targets requires reducing vacation periods, appointment of more judges and increasing their retirement age, ad hoc appointment of retired judges for specific cases, tweaking the daily working hours of the Court, altering the weekly split between ‘miscellaneous’ hearings and regular hearings, detailed ‘case management’ hearings in complex cases (illustration here), strict and consistent policies on adjournments, or even increasing the capacity of the Supreme Court registry, then those measures should be adopted. Without having particular outcomes in mind we can be sure that we will never fall short. Nor will we know how much we should have achieved!