By and large, commercial banks operate in the insurance sector either as joint venture partners or as corporate agents. Historically, the Reserve Bank of India (“RBI”) has encouraged banks to enter the business (whether as a joint venture participant or as a corporate agent) provided they followed some guidelines and maintained some standards. However, to ensure that a bank maintains its solvency requirements and continues to function as an effective bank, the RBI insists on banks obtaining its prior approval before entering into the sector as a joint venture participant. The RBI does not perceive a similar risk in a bank acting as a corporate agent because there is no equity participation by the bank and the corporate agency is only a subsidiary business. Prior approval therefore, is not required.

Since foreign investment up to twenty-six per cent is permitted in the insurance sector, banks are highly sought after joint venture partners. Banks offer their huge database and distribution network to foreign partners who bring in specialised expertise. An insurer’s success depends on how deeply it penetrates the market and a bank’s readymade distribution network is very useful. ICICI Prudential Life Insurance Company and ICICI Lombard General Insurance Company are examples of this structure.

A corporate agent is an insurance intermediary appointed by an insurer to sell its products. Its principal duty is owed to the insurer. Again, an established distribution network and the availability of a large database are advantages and insurance companies that have banks within their group benefit from having them as corporate agents.

According to Regulation 3(2) of the IRDA (Licensing of Corporate Agents) Regulations, 2002(“CA Regulations”) and subsequent circulars issued by the IRDA, a corporate agent (such as a bank) can only sell the products of one life insurer, one general insurer, and one health insurer.

New entrants face a distinct disadvantage. This is because most banks (who are ideal corporate agents) are either already in joint venture partnerships or have corporate agency tie-ups. Without an efficient distribution network, an insurer invariably meets its downfall.

Keeping this in mind, the Insurance Regulatory and Development Authority (“IRDA”) in 2011, notified draft regulations – the (draft) IRDA (Licensing of Bancassurance Agents) Regulations, 2011. Amongst other changes, this regulation divided the country into zones and permitted banks to act as corporate agents for a specified number of insurers within the same zone. In short, it proposed that the prevailing limit for acting on behalf of only one life insurer, one general insurer, and one health insurer in the whole country, apply instead to a zone. This tried to balance the playing field for new insurers who could also now appoint banks as corporate agents.

These regulations however, were never notified and there has been no statement from the IRDA explaining the delay.

There was strong opposition from industry — mainly, a strong lobby of insurers who already have banks as joint venture partners or corporate agents. Other insurers also felt that though this move may help insurers, it would not help consumers who would have to deal with different corporate agents as they moved across zones.

Interestingly, this was not the direction issued by the Finance Minster to the insurance industry on October 1, 2011. He had clearly indicated that if banks wanted to sell the products of more than one insurer, they should opt to become insurance brokers.

As brokers, the Finance Minister felt, banks would also become responsible sellers and be able to sell the products of different insurers. Accordingly, the IRDA notified the IRDA (Licensing of Banks as Insurance Brokers) Regulations, 2013 and the Reserve Bank of India notified certain requirements through its circular dated November 29, 2013. In short, banks were permitted to be insurance brokers with the prior approval of the IRDA and the RBI. This seemed to be good for banks, which could now choose between operating as insurance brokers or as corporate agents. 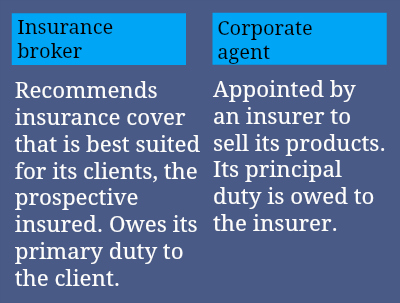 This move has the backing of the IRDA who have proposed that these guidelines will be the same for both state and private sector banks. There cannot be a distinction where state-run banks are selling all products while private banks continue to peddle the products of their own group companies.
It is becoming increasingly clear that the regulator is not going to change its stance. From a preliminary analysis, this will adversely affect banks that have promoted insurance companies. Most of these banks are corporate agents for life and general insurance companies within their group. Asking them to sell products of competing insurers does not make commercial sense. In fact, the executive directors of state run banks have clearly said that their foreign partners are already questioning their decision to enter India when the policy keeps changing arbitrarily. A joint venture is based on the premise that the insurer uses the Indian bank’s branch network for expansion. Taking this away, changes the game. Two foreign insurers — New York Life and ING — have already exited their Indian ventures.

Perhaps, the regulators should analyse the adverse effect of this step on the insurance market, which is flooded with bank-promoted join ventures. An exit by foreign players does not help the market as it loses more sophisticated insurance practices.

This move also seems to have left the insurance industry in confusion, as there is no clarity on how the existing arrangements will be treated. Should they be terminated now or can they run their course? None of the banks have been asked to surrender their corporate agency licences. The CA Regulations have not been amended to exclude any reference to a ‘bank’. The IRDA has issued no circular, clarification, or direction to clarify matters at a time when clarity is much needed.

This position calls for better thought out and more regulated action by the IRDA and the Finance Ministry. There is much that needs to be clarified and one hopes that there will be more concerted thinking in the coming months before such a drastic step is taken.