Most jurisdictions require arbitration agreements to be in writing if they are to be recognised. Article II of the Convention on the Recognition and Enforcement of Foreign Arbitral Awards, 1958 (“the New York Convention”), Article 7 of the original UNCITRAL Model Law on International Commercial Arbitration (1985) before it was amended in 2006 (“the 1985 Model Law”), and Section 7 of India’s Arbitration and Conciliation Act, 1996 (“the Indian Act”), all contain this requirement.

We know that there are different ways of entering into contracts — including electronically, by reference to other documents, and orally. Sweden and Norway could not find any rational basis for treating arbitration agreements any differently. Article 1 of the Swedish Arbitration Act and Articles 3 to 10 of the Norwegian Arbitration Act recognise any kind of agreement through which the parties have reached a consensus to arbitrate. The 2006 version of the UNCITRAL Model Law on International Commercial Arbitration (“the 2006 Model Law”), in Article 7, allows states to abolish all formal requirements of validity. Some states, like England, have taken a halfway house approach. While requiring the arbitration agreement to be in writing, they also allow that requirement to be met quite easily.

The recent Bombay High Court decision in Mody v. Kerwala (September 19, 2013) is in contrast to this approach. The Court held that not only must an arbitration agreement be in writing according to Section 7(3) of the Indian Act, the fact that the agreement is in writing can only be proved as specified in Section 7(4) of the Act.

Without debating the relative merits of the strict “in writing” approach, let us look at the enforcement issues that arise from the multiplicity of legal approaches on this point. 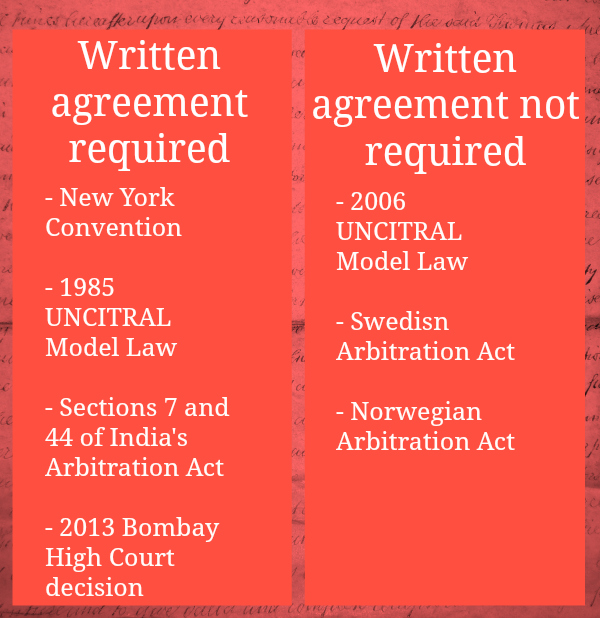 Consider Part II of the Indian Act, which gives effect to India’s obligations under the New York Convention. Section 44 of the Indian Act defines a “foreign award” as an award made in a New York Convention signatory state (and notified by the Central Government as fulfilling the reciprocity requirement), and made pursuant to an agreement in writing. Every other provision in Part II, including an Indian court’s obligation to refer stay proceedings brought in breach of foreign-seated arbitration agreements (Section 45), its obligation to recognise a foreign award as final and binding (Section 46), and its obligation to enforce and execute the award (Sections 47 to 49), is contingent on the award being a “foreign award” under Section 44, that is, made pursuant to an agreement in writing.

So, would an award made pursuant to an oral agreement in say Sweden (a country notified by the Central Government), be a “foreign award” under Section 44? Can it be enforced in India? How would it satisfy Section 47’s evidentiary requirement of producing the original arbitration agreement for enforcement?

However this is resolved at the national and international level, the drafting lesson here is very clear. Always ensure that your arbitration agreement is valid under the law of the seat, the law applicable to the arbitration agreement (which should always be specified), as well as the law at the place of enforcement. Otherwise, there is a very real danger that your award might not be enforceable, even if your agreement and award are perfectly valid at your seat.