Recently, the European Commission (“the Commission”) commenced an investigation into the funding of seven Spanish football clubs. The Commission Vice President in charge of competition policy, Joaquín Almunia said, “Professional football clubs should finance their running costs and investments with sound financial management rather than at the expense of the taxpayer. Member States and public authorities must comply with EU rules on state aid in this sector as in all economic sectors.” The Commission will investigate the tax privileges of four clubs including Real Madrid and Barcelona, assess a widely reported land transfer between the City of Madrid and Real Madrid, and examine guarantees given by the state-owned Valencia Institute of Finance for loans that were used to finance the three Valencia clubs while those clubs were seemingly undergoing financial difficulties.

Sport and competition law in the EU

Sport has a significant role in the European Union’s economy. According to the European Commission (“EC”), it represents 3.7 per cent of the EU’s GDP and employs fifteen million individuals. Football constitutes the major chunk. It should not come as a surprise therefore, that the Union of European Football Associations (“UEFA”) and the clubs affiliated with it are no strangers to competition law investigations.

A number of concerns have occupied these investigations and final judgements. The joint sale of sports media rights was at issue in the U.E.F.A. Champions League, the F.A. Premier League, and the Bundesliga decisions, while the joint acquisition of sports media rights came under scrutiny in Eurovision I  and Eurovision II. The European Court of Justice has confirmed that the commercial exploitation of sporting events is covered by E.U. competition rules (the MOTOE case), and in the Meca Medina Case, the Court finally held that the compatibility of sporting rules with EU competition law should be examined on a case-by-case basis.

The Treaty on the Functioning of the European Union (“TFEU”), under Articles 107 to 109, provides the Commission with the power to deal with aids provided by member states to their domestic industry or enterprises, which could distort competition in the internal market. 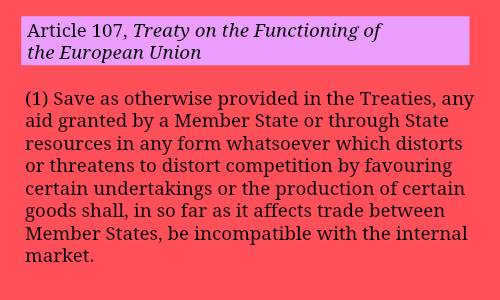 The second and third clauses of Article 107 provide for the situations that the Commission shall and may respectively, consider as compatible with the internal market. Article 108 provides for the procedure for monitoring any state aid and the consequence for any state aid that is incompatible with the internal market. Council Regulation 659/1999 and Commission Regulation 794/2004 were framed under Article 109. Commission Directive 2006/111/EC on “the transparency of financial relations between Member States and public undertakings as well as on financial transparency within certain undertakings” is also relevant to this discussion.

Why is state aid a problem?

To understand why this investigation is in progress today, we must turn to a report on the financial health and status of professional football clubs, Club Licensing Benchmarking Report Financial Year 2008, published by the UEFA in 2008 during Michel Platini’s term as President. 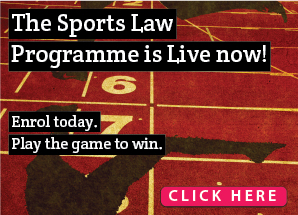 According to the report, most professional football clubs were facing recurrent losses. It warned of a dire financial outlook for European clubs and blamed it on the constant increase in players’ salaries, which amount to more than sixty per cent of a club’s expenses. The most important leagues — for the sport and for the economy — were (ironically) the ones with the greatest aggregated debt. The report advocated “financial fair play”.

Many clubs were registered as companies and shareholder contributions and other sponsorship helped, but several clubs survived on public intervention. State aid appeared in several guises including direct subsidies, sponsorship under non-market conditions, non-collection of tax or social security debts, and aid for the construction of sports infrastructure. Some of the allegations made by the Commission in relation to the Spanish clubs, paint exactly such a picture.

Therefore, this is a much-delayed investigation and has probably been triggered by public sentiment following the financial crisis. In fact, the present investigation is not unprecedented. In March 2013, the Commission had opened an investigation into the public funding of five professional Dutch clubs, including PSV Eindhoven.

Subject to a caveat that it is a prima facie opinion based on the facts already available in public domain, the Commission does seem to have a case. At the time of writing, the E.C. was negotiating confidentiality issues with the parties.

Under E.U. competition law, one of the principles for the justification of state aid is the Market Economy Investor Principle (“MEIP”), according to which public interventions in favour of market actors that carry out economic activities can be considered free of state aid within the meaning of EU law when they are made on terms that a private operator would have accepted under market conditions. If the MEIP is not respected, the public interventions will constitute state aid within the meaning of Article 107, because they confer an economic advantage on the beneficiary that its competitors would not have. I find it very hard to justify the measures and subsidies in favour of these clubs under this principle. Strictly on economic terms, the clubs should have either downsized or closed down a long time ago. It is quite possible however, that the clubs and the Commission will choose to settle any penalties and work out a formula for the gradual withdrawal of state aid.

(Sudipto Sircar, an Advocate at the Delhi High Court is the founder of the Indian Competition and Anti – Trust Blog. You can reach him at sudiptosircar@outlook.com)