A district court in India, usually housed in a majestic colonial-era building, is easy to describe. There are the rows of advocates and notaries under every semblance of a shade. Liver-red pan stains, that marker of Indian civil space, is ubiquitous. The milling crowd haplessly try making sense of the time-place set. It is crowded, chaotic, confusing and altogether brutish.

Since the September of 2008, the Dwarka District Court Complex (“the DDCC”) has strived to be not just an exception to the rule, but also a prototype for the future rule. Situated right next to the Sector-10 Metro station in the Delhi suburb of Dwarka, the complex is a sensible blend of practicality and the futuristic.

That the DDCC is different from other courts is apparent as soon as you enter it. As you go past the gates manned by private security guards and into the complex, two things stand out – it is rather unexpectedly spic and span, and even at the peak of a Delhi summer, it is pleasantly cool. The DDCC is India’s first district court with centralised air-conditioning and 24-hours power backup.

The 79 courtrooms of the DDCA are housed in four wings in two seven-storey buildings built around a tasteful, circular courtyard. Courtrooms are at every alternate floor, surrounding expansive lobbies, with the judges’ chambers distributed in the other floors. Separate buildings house the lawyers’ chambers and the administrative block. The entire facility is disabled-friendly and provides barrier-free access. 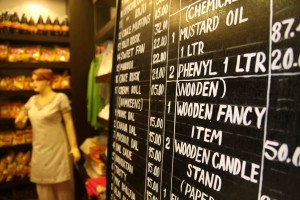 The complex also has a canteen, a post office, a facilitation centre, and separate libraries for judges and lawyers apart from the police station and judicial lock-up. Could not find a white shirt in the morning? There is a TJ’s outlet, a Tihar Jail initiative, where white shirts sell as briskly as their famed namkeens.

The facilitation centre provides all the information the litigant or the lawyer might need about matters taken up during the day and the courtrooms where they will be heard. Coupled with the digital display boards outside every courtroom, it goes a long way in making life simpler for those with business before the court.

Mr. I. S. Mehta, the honourable district judge, who has been at the helm of affairs here since the inception of the complex, has a very hands-on approach in running it.  “When we took possession of the complex, none of these amenities were around,” he points out, “Since then we have kept adding user-friendly features to it.”

The court is also in the forefront in the use of technology. Video-conferencing enabled courtrooms are extensively used in deposing in such sensitive matters as rape cases. A new biometric attendance system will be in place from next month for employees.

The lawyers’ chambers go a long way in adding to the dignity of the complex. It provides consultation rooms to lawyers at a nominal amount. “Chambers are essential for the efficient functioning of lawyers. The facilities provided in other (Delhi) courts are hardly conducive for business,” said Mr. P. S. Singh, Secretary of Dwarka District Court Bar Association, as he was overseeing the final work on the chambers on the sixth floor.

The facilities available at the DDCC have prompted demands for the shifting of more business here. Though the court’s jurisdiction is limited to the South-West district, it has special jurisdiction over all S.138, Negotiable Instruments Act, 1881 (cheque bounce) cases involving financial institutions in Delhi. The lion’s share of pendency emanates from the S.138 cases, and eight evening courts function exclusively to dispose of them. The Family Court, too, functions in the premise. The complex also has state-of-the-art alternate dispute resolution facilities. 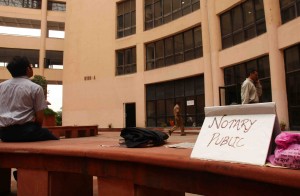 With just thirty-odd functioning courtrooms, the complex is heavily under-utilised. The authorities here deem this issue a policy matter for the Delhi High Court to decide on. “There is a lot of opposition from bar associations of other courts to shifting more matters here. ” a lawyer, who did not want to be identified, informed this correspondent. There is an excellent case to be made for the shifting of more tribunals to the complex. The real test for the complex would be when it approaches capacity functioning. Also, for a court complex that has automatic taps in the washrooms where you would be loath to touch the plumbing with your bare hands in most other courts, it is extraordinary not to have a website.
It is easy to pine for the architectural refinement of Patiala House. But once you visit the cool environs of the DDCC, it is hard to keep complaining.