A lawyer is conventionally imagined as a standalone creature – someone who exercises the faculties of research, drafting, and argumentation as an individual. A lawyer operates in these modes, usually aided by clerks and junior associates. With the expansion of the modes of negotiation-based lawyering, legal work has spread across large teams and progresses along associational logics. This is especially true for legal practice in transactional advice, due-diligence exercises, arbitration, and so on. Of the four figures I have spoken about before, three have started or helped start new organisations – Arvind Narrain started the Alternative Law Forum, Amba Salelkar helped with the establishment of the Inclusive Planet Centre for Disability Law and Policy, and Harish Narasappa has been involved with starting two organisations – Samvad Partners and Daksh India. I wish to focus on the specific skill of beginning, sustaining, and spreading an organisation. It is not a skill that lawyering necessarily teaches. Why did these lawyers see value in initiating organisations?

We might derive organisational models from the eminent French sociologist Emile Durkheim – shared values and goals lead to a mechanical solidarity, while organic solidarity arises out of a community fitting into each other’s needs. It is difficult to fit a legal organisation clearly into the fold of one or the other. In focusing on three policy reform and legal activism organisations, I might show that their inception is closely linked with a different strategy of lawyering, and therefore, form the bases of mechanical solidarity. 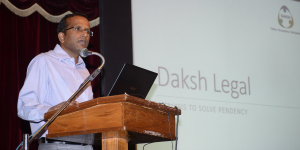 Harish Narasappa at the launch of Daksh’s Rule of Law Project on February 7, 2015.

The Alternative Law Forum (“ALF”) quite literally spells its agenda out as ‘alternative’; the others too attempt to put in place a professional architecture where a diverse set of lawyering services may be nurtured and delivered. Inclusive Planet attempts to provide a bridge between mainstream lawyering wisdom and large numbers of persons with disability, advocates, caregivers, and others, who need a basic understanding of what the law is and what it can deliver for them to address disability. The spread of such legal literacy is at the heart of the ALF’s long career as well – Narrain and his colleagues speak to many non-legal audiences, especially students, about legal issues of contemporary importance, especially on gender and sexuality. At Daksh, the engagement with the public is to train a certain ear for information which is to be culled out, collated, published, and fed back into the citizenry in order to be used for effective democratic practice, in elections and elsewhere. These methods generate solidarities beyond the technological walls of legal learning and expertise. Publics involved in the journey towards a certain mode of justice or equity, come to use and inhabit the law and its machinery through such organisations. Publics are able to imagine themselves as active users of legal and judicial wings of the state. As much as this habitation may bring concrete benefits in terms of legal reform or relief, it also generates a live register in which to rehearse and consolidate the terms of citizenship.

Organisations like the Lawyers’ Collective and individual lawyers like Rajeev Dhavan, Indira Jaisingh, Prashant Bhushan, and others have provided such organisational leadership in the litigating domain. These lawyers have formed bridges between social movements, civil society orgnisations, and the judiciary, often urging the judiciary to take activist stances towards various state and private bodies. Their lawyering has yielded expansive interpretations of fundamental rights especially in the context of free speech, discrimination, the rights of minorities, affirmative action, and so on. There is no doubt that the tradition of judicial activism has been a key tool for the broadening of access to law by the general public. 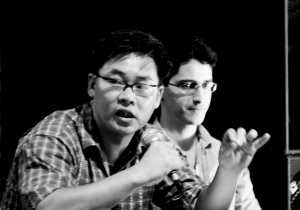 ALF’s Lawrence Liang (left) speaking at the iCommons summit in Dubrovnik in 2007. CC BY 2.0

Between the law and the public, a dynamic and inchoate space has been sustained by efforts of public interest legal organisations. One could argue that this space is one among many other civil society spaces. I would argue that the use of the law and the conscious engagement of a public in such legal activism, is a specific register of civil society – one that exercises a facility in speaking the impervious state language. It may earn legal benefits. But the long view of benefits is more towards empowering a shade of public voice that speaks the language that the state speaks in. With Daksh especially, we find the ability and scale of operation to be one that impacts the everyday practice of democracy (at the localised scale of the MP and the MLA) for large numbers of citizens. To the extent that it is possible to make democracy meaningful for each citizen, organisational spaces that percolate the effect of law are most important. To this extent, the activities of legal sensitisation, teaching law to non-lawyers, campaigns for non-judicial law reform, implementation efforts that engage state actors, affected parties, intellectuals, and activists are of key importance in the wide arena of civil society efforts to engage the government. To be aware of the law, talk in its idioms, and talk back to law-making and implementing authorities is close to impossible without the assistance of organisations such as this. That lawyers such as Narrain, Salelkar, and Narasappa are able to open spaces for such active engagement with the law, involving non-legal actors, is a significant contribution to the role of law in the functioning of a democracy.