Hi there, freshers. I hope the first few weeks of law school have lived up to your expectations. I can imagine that you are just getting used to the new sights, sounds, and smells (the hostel rooms, bathrooms, and nearby eateries included) that will become part of home for the next five years. Oh, and of course, the ‘positive interaction’ with the seniors, which at NLS Bangalore means that most of you would already have been asked about your claims to fame. I have already written about the library and the academic side of things at law school but there is a lot more. This post is about some of the many activities at law school that you can participate in and the committees  that are part of them. I will cover moots and publications in my next post here.

You must have seen the football field, the basketball and tennis courts and the gym around the campus. Soon, you will see some of your seniors out there playing hard and pumping iron quite regularly. If you love playing a sport, don’t let it die out. Not only is sport a great activity to make new friends, soon you will also realise that it is one of the best ways to take a break from the routine monotony of law school. A mention here of Spiritus, the annual law-school-only sports fest at NLS Bangalore. Wait till you get your first taste of it! 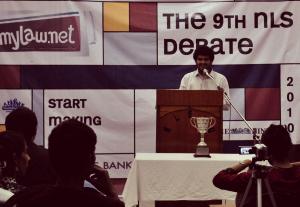 Law schools are some of the best colleges represented in the debating circuit in India, and abroad. It is perhaps one of the most popular activities on offer, and it can be a lot of fun. If you develop a taste for it, there’s nothing like it to help you think critically. This isn’t your school’s elocution competition where you remember a script and deliver a passionate speech on subjects like “the problem of inflation”. You have to think on your feet in twenty minutes on motions as straightforward as, “this House believes the Indian Parliament should reduce the age of juveniles” to not-so-straightforward ones like, “this House believes America’s right is wrong”. Debating also helps you develop any oratory talent you might have. I remember being in complete awe of the experienced seniors I watched debate in first year, fiercely arguing without any script before them. A seven minute speech is asked for, and boy is the first one hard to deliver. There is howver, nothing quite like the feeling of getting it right for the first time.

If you lean towards the arts on the other hand, don’t worry. At least at NLS, we used to have singing, dancing, and theatre. A long time back, cultural activities were very popular in college, with people actively taking part in college fests around Bangalore. Over my five years of college though, cultural activities suffered a great deal. Perhaps the only two remaining relics are the theatre-fest Admit One, and Legala.

Like Spiritus in sport, a take on cultural activities would remain incomplete without mentioning Strawberry Fields, the annual rock show hosted by NLS Bangalore. Go, check out videos of previous editions on Youtube!

All of these activities are organised by committees in law school, and as first years, they all want you in them. Please remember though, that you don’t need to be on the debating committee if you like to debate. It’s the organising that committees handle, and as a first year you will be working together with seniors and getting to know them better. In fact, as a first year, you are expected to help in the ground-work for most of the fests that will happen over this year. This used to be an issue, as seniors weren’t always polite in asking the first years to help, as some considered it an obligation. There are no obligations, but please do see what it’s like before refusing to take part. Most of my classmates will never forget our first Spiritus. The 6 a.m. mornings, setting up venues, frantically drying up the basketball court with newspapers after those incessant Bangalore showers, and that awesome feeling at the end, when you know you made that great event happen.

(Abhinav Sekhri is a fifth year student at the National Law School of India University, Bangalore. The previous articles in this series are here.)

The Parliamentary style of debating is the most common internationally. A derivative of the formal procedures followed for policy-making and discussions in the British House of Commons, also known as Westminster Parliamentary Procedures, it is a formal style of debating, focusing on teams participating in the form of the “government” and the “opposition”.

The “government” is also sometimes referred to as the “proposition”, because in Parliament the policy that is to be discussed and debated is referred to as the “motion”. Therefore, parliamentarians initiate the debate, and hence, the quite literal term “proposition”. The crux of these procedures was “majority rule”; that is, getting the majority of delegates present to vote in a particular manner (either for or against the proposed policy, depending on the side one represents).

Considered to be a refined and formal style, the basic premise of these procedures was picked almost verbatim for the Parliamentary Style of Debating.

The premier debating event in this category is the World Universities Debating Championship, colloquially referred to “the Worlds”. Here, speakers from each side are usually given a fifteen-minute notice of the motion before the debate. In keeping with the concept of a “motion”, the subject of the debate is loosely defined at the start, and refined further by the “proposition”, when speakers start the debate. The opposition has to define their response upon proposition to further refine the motion. But in keeping with the spirit of equal representation, all teams get the opportunity of appearing as the “proposition” as well as the “opposition”. To maintain the spirit of Parliamentary Procedures, each side can consist of two teams, forming a “coalition”. To make the debating more intensive, each team within the coalition must outline the motion in a specific and exclusive manner.

The opposition can raise clarifications and questions in the form of “Points of Information” (“POIs”), which the speaker holding the floor may accept or reject. The speaker has the discretion to choose the POIs they wish to respond to but they cannot reject all. One must keep in mind at this time, that the speakers are presenting their submission before a notional audience of members of Parliament, the crux of the debate is to “convince” them of the validity of their team’s stand on the motion.

In order to prevent an unfair advantage to any team during the debate, there are clearly defined rules determining how the debate is to be conducted and judged. The speakers are judged both individually and as a team by “adjudicators” throughout the event. Adjudicators fulfil the dual role of judging the quality of the debate as well as serving as the “audience” to the speakers. In this capacity, therefore, they ensure that the speakers are following the rules, maintaining proper conduct, and also making substantive points through their submissions.

Some of the main rules adjudicators watch out for when the debate is in process include the motion being defined too “tightly”; that is, with no room for realistic, substantive opposition to the motion defined, or “tautologies”; that is, motions that are self-evidently true. For example, a tautology would be “This house maintains that the sun rises from the east”. This is a true fact and cannot be refuted by the opposition. A “tight” definition would be “This house maintains that it is unfair to run people over by automobiles”. The opposition would evidently have a tough time coming up with reasons to refute this.

Since the debates are partly spontaneous in nature, as well as a coming together of diverse individuals from different educational backgrounds, another definitional rule for motion that is followed strictly is the prevention of “specific knowledge” cases. As suggested by the term, a motion that is defined in a manner that requires the opposition to have specific, in-depth, or technical knowledge is not acceptable within the Parliamentary Debates. For example, “This house maintains that compound X is the most effective raw material for creation of material Y”.

It must be pointed out that in keeping with the formal style adopted whilst debating, the viability of the motion for debating has to be adjudged by the speakers, and the adjudicator would not reject a motion outright. If the opposition feels that the motion is unacceptable because of the reasons mentioned above, they must point that out at the start of their speech, along with clear reasons for the same, as well as an alternate definition to the motion. If accepted by the adjudicators, the opposition can continue to follow the motion they defined and debate on that. In such a situation, two parallel definitions of the motion are debated upon by the proposition and the opposition, and the adjudicators judge the teams on both. Each side get a chance to offer a “constructive”, that is, building of arguments, and a “rebuttal”, that is, responding to specific aspects of the opposing side’s arguments.

At the conclusion of the debate, the adjudicators make their decision on the basis of content as well as style.

Because of the widespread following of the Parliamentary Style Debates, there are no absolute rules of procedures. Each university customises the main theme of the debate to its own settings. These are always defined beforehand. However, the overall context remains the same.