The Kutch district in Gujarat, one of the largest in India, has a coastline of 405 kilometers and inter-tidal area of about 200 kilometers. For generations, communities in the district have engaged in agriculture, pottery, animal husbandry, weaving, fishing, and salt production. The last two occupations directly depend on the sea and the shoreline and have always co-existed in designated parts of the inter-tidal belt.

In recent years however, commercial expansion, especially of salt production, has contested for the space otherwise occupied by small and artisanal fisherfolk. The “bunding” and “drawl” of water for large saltpans has also had an impact on the livelihoods of fisherfolk who seasonally cultivate prawns.

Conflict at the fishing harbour

One such instance came to light in the case of Bavdi bander, a fishing harbour in the Mundra block of the district. Neelkanth, a large salt production company, procured a lease for salt production on the bander. It then started to bund, by reclaiming the sea using stones and soil, more than one kilometer of the inter-tidal area to create saltpans to divert and collect seawater for the production of salt.

Exactly where Neelkanth had carried this out, a fishing community would spend 7 to 8 months every year, fishing with small boats or on foot (known as pagadiya fishing). They used the tidal area for parking their boats but once the bund was built, they had to keep their boats far in to the sea and further away from the coast line and so faced difficulties in the transfer of the fish catch from the boats on to the harbour where it would be sorted and dried before being sold. This was not all. The construction of the bunds also destroyed approximately 20 hectares of mangroves. 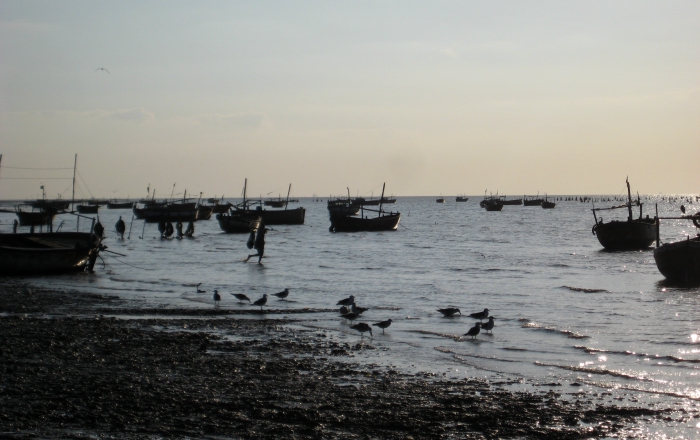 The biggest revelation of all unfortunately, came to light only after the impact of bunding had already played out. Neelkanth did not have the clearance required under the Coastal Regulation Zone (CRZ) Notification, 2011.

It came to light by accident. On January 22, 2013, a committee constituted by the Ministry of Environment and Forest was visiting the area. Set up on September 14, 2012 to review the violations of the Adani Port and the Special Economic Zone located 45 kilometres away from the Bavdi bander, its members also decided to visit the bander to investigate claims about compensatory mangrove plantations in the area. Representatives of the Gujarat Coastal Zone Management Authority (GCZMA), local fish traders, and representatives of the Machimar Adhikar Sangharsh Samiti (a fishing union of the area) also accompanied the committee members.

They saw the large bunds that had been built into the sea. The people living at Bavdi bander complained that the bunding created obstacles to the natural flow of the sea water during periods of high and low tide. They also aired their difficulties related to the parking of their boats and how all this was severely affecting their livelihood. On the committee’s recommendations, the Principal Secretary of the Department of Environment of Forests in the Government of Gujarat issued a show cause notice on February 27, 2013. But the action ended there and the bunding continued unabated.

A different kind of salt satyagraha 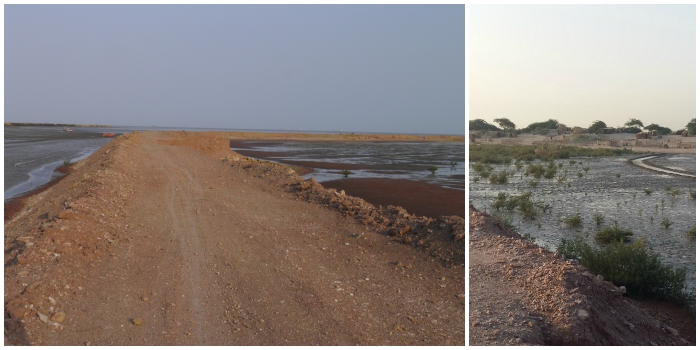 In need of a remedy, some fisherfolk from the area approached the High Court of Gujarat. It took several hearings and over 18 months for a final judgment to emerge from the Court only on August 27, 2015. The District Collector had told the Court on April 10 that the lease for the salt pan had not been renewed. If any bunding activity did happen therefore, the District Collector could take action.

While the case was pending in court, there were some developments at the harbour and Neelkanth had continued its activities unabated. Some time in late 2014, the people of Bavdi, not clear about how the case would proceed, approached the Centre for Policy Research-Namati Environment Justice Program, which had been working in Kutch to understand the impact on livelihood caused by problems related to non-compliance with the law in coastal areas.

Bharat Patel and I work with the programme and we realised that the people of Bavdi knew that even though an illegality had occurred, which was affecting their livelihood, they had not received a remedy. While recording the nature of the problem, we also came to know that the owner of the Neelkanth salt company was trying to secure another permission on the same land, this time in the name of one of his relatives.

With some help from us, they came to know from the website of the Gujarat Costal Zone Management Authority (“GCZMA”) that this was indeed the case. The minutes of a GCZMA meeting held on April 10 this year record that Neelkanth had applied for CRZ clearance in the name of Vasta Govind Chavda. This was for the same area where the bunding had been done, for which the show cause had been issued and a court case was pending.

From the minutes, the fisherfolk realised that the GCZMA had asked the proponents to submit a revised application so that their CRZ clearance can proceed. We saw this as an opportunity and decided to petition the GCZMA to not grant this approval because an illegality had already occurred and because the matter was pending before the Gujarat High Court.

Before they submitted the application to the authority, they discussed the importance of backing their claim with evidence. They had to prove that the place for which CRZ clearance was being sought already had an illegal salt pan and that the matter was sub judice. They relied on Google Maps to plot the area, backed it up with photographs, and also copies of notices that had already been issued to Neelkanth. Only when they had this in hand did the representatives of the affected community draft a letter to the GCZMA demanding that approval be denied. It also explained the relation between Neelkanth and Vatsa Govind. This letter was sent to the Chairman and members of the GCZMA on April 8.

At its very next meeting, on May 15, the GCZMA took a decision that favoured the fishing community. Vatsa Govind’s proposal was rejected because the area in question was rich in biodiversity with dense mangrove patches and sand dunes. The company therefore, had to submit a fresh application for a CRZ clearance for a different area.

Meanwhile, the sea has reclaimed the bund that was created illegally. With the saltpan lying vacant, the tidal water has gradually brought back the boats, the fish catch, and the spirit of the people.

Vimal Kalavadiya works with the CPR-Namati Environment Justice Program. This article has been written with inputs from Bharat Patel who is also associated with the programme.