A decade ago, in People’s Union for Civil Liberties v. Union of India, the Supreme Court held that the mandatory public disclosure of the criminal records of candidates contesting constituency-based elections enjoyed the legal tutelage of Article 19(1)(a) of the Constitution of India.

Established jurisprudence dictated that the paradigm of speech and expression also entailed ancillary rights including the right to receive information that could best inform speech and expression. This view, adapted from several cases, drew on the catalytic relationship between awareness and the (right of) free expression. The Court had perused the nature of the right to vote and held that even though it was a statutory right, the final act of voting was a form of electoral expression and a vital source of sustained democratic engagement. The elector therefore, had a right to know the criminal antecedents of contesting candidates under Article 19(1)(a).

This year, the Supreme Court revisited the paradigm of electoral expression on the limited question of whether the principle of “secret ballot” applied to those citizens who — though statutorily eligible to cast a vote — wished to exercise the “right not to vote”. Tasked first with finding if such a right even existed in the electoral scheme, the Court pointed out that Section 79(d) of the Representation of People Act, 1951 (“RP Act”) defined an electoral right to include the right to vote as well as the right to refrain from voting. Moreover, Rules 41(1), 41(3), and 49-O of the Conduct of Election Rules, 1961 recognised the electoral right of voters not to cast a vote by laying down procedures to be followed in case such a right was exercised.

Having found in favor of its existence, it examined its nature, and concluded that a positive “right not to vote” was part of the expression of a voter within a parliamentary democracy. It had to be given effect to in the same manner as the right to vote — including a provision for maintaining the secrecy of ballot. Needless to add, it also came within the sweep of electoral expressions that, as held previously, enjoyed the protection offered by Article 19(1)(a) of the Constitution. 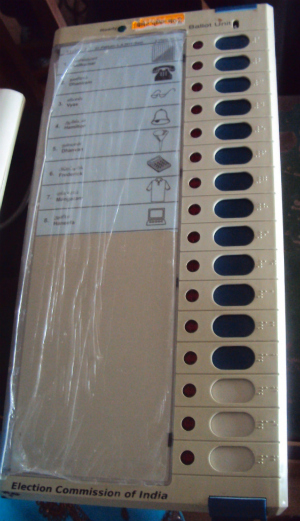 The Court reviewed the electoral scheme to see if electors exercising their right to not vote were treated at par with electors who cast a vote in favour of contesting candidates and found that only the voters who came out in support of a contesting candidate were able to cast a valid vote on the electronic voting machines in a manner that maintained secrecy of their ballot. Electors who wished to exercise their electoral right to not vote however, could not do so. They were instead forced to contend with the impugned provisions of Rule 49-O which laid down an elaborate procedure of identification and registration, thus, compromising the principle of secrecy extended to other voters.

In order to remedy this discriminatory treatment, the Court directed that the option “None of the Above” should be provided on voting machines in order to accommodate the expression of those exercising their right not to vote. The provisions of the RP Act and the Conduct of Election Rules, 1961, which compromised secrecy, were also held to be unconstitutional and struck down.

In my next post, I will deal with the Supreme Court’s use of the terms “negative vote” and “neutral vote”.