Throughout its verdict in People’s Union for Civil Liberties v. Union of India, the Supreme Court’s sporadic and interchangeable use of the terms “negative vote” and “neutral vote” to describe the electoral right not to vote, muddied the status of the “None of the Above” (“NOTA”) candidacy.

After all, if there is an electoral right to cast a “negative” vote, a contestable NOTA candidacy would naturally follow. This means that in constituencies where the NOTA candidacy garners a majority vote, all candidates would stand rejected and a re-election would be necessary. On the other hand, if the right is “limited” to a “neutral” vote, the NOTA candidacy would just be a reservoir of abstentions that will not affect the election result.

To add to the interpreter’s maladies, the judgment concludes with an inspiring yet mystifying observation — “…when the political parties will realize that a large number of people are expressing their disapproval with the candidates being put up by them, gradually there will be a systemic change and the political parties will be forced to accept the will of the people and field candidates who are known for their integrity.” Can this be characterised as yet another rhetorical flourish or a gamely attempt to posit the NOTA candidacy as a contestable one?

Other aspects of the judgment however, suggest that the right not to vote has been understood by the Supreme Court as a limited right to cast a valid yet incontestable vote of abstention. For instance, the Supreme Court illustrates its argument in favour of the right not to vote by drawing on the provision of abstentions in the voting mechanism adopted by legislative assemblies. The Court points out that rather than disallowing an abstaining legislator from casting a vote at all (as in the case of voters participating in constituency-based elections), the voting process recognises her right to positively assert an intention to abstain and allows her to cast a valid vote which is, well, innately incontestable.

Importantly, the Supreme Court employs abstention as the intended analogy to the right not to vote, while giving a go-by to the “no” or “negative” vote, even though this option is also available to legislators. 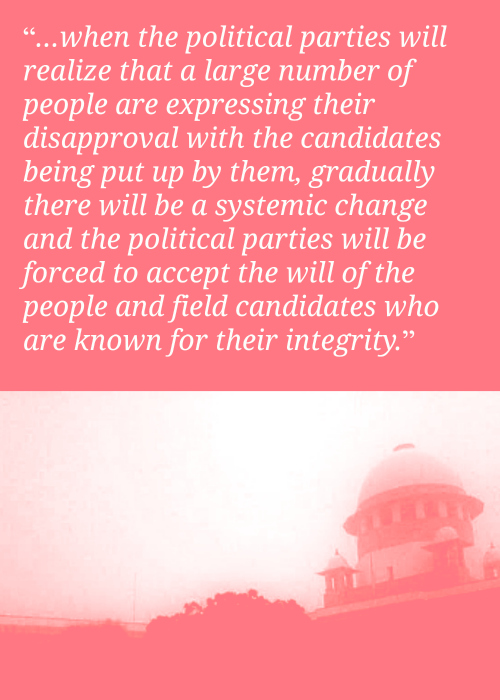 Secondly, while directing that a NOTA button be provided in EVMs, the Court observes that such a step is necessary since: “A voter may refrain from voting at an election for several reasons including the reason that he does not consider any of the candidates in the field worthy of his vote. One of the ways of such expression may be to abstain from voting, which is not an ideal option for a conscientious and responsible citizen”.

The Supreme Court also stops short of addressing the second prayer of the petitioners — that if more than fifty per cent of the electorate exercise the ‘NOTA’ option, re-elections must be held. Unless this is taken as a sign of misplaced brevity or implied acquiescence, it demonstrates the Supreme Court’s view that the right not to vote is really a right to register abstentions by casting a valid yet incontestable vote.

Even after its judgment, the Supreme Court has demonstrated that it isn’t inclined to take any other view of the matter (or more accurately, to supplement its finding or clarify its position). Last week, a bench headed by the Chief Justice declined to direct the Election Commission to hold re-elections even if the NOTA candidacy garnered a majority of the votes polled. Interestingly, the basis of refusing to issue such directions was not a substantive revaluation or clarification of its own findings in the judgment (discussed above) but a view that such directions would constitute judicial overreach. This insight into the court’s motivations for limiting electoral expression to abstention could well be the subject of yet another debate; but that it has chosen to take a “neutral” view of the electoral right to not vote is clear.

Seen in this light, the right’s scope and impact certainly cannot be equated with a contestable vote to reject candidates and potentially necessitate a re-election: itself a daunting socio-economic prospect. In the present scheme, while the cumulative expression of abstention by the electorate will be compiled, recorded and published by the Election Commission, it will not a have direct bearing on the overall result of the election.

In my next post, I will discuss the impact of formalising abstentions in this manner.