The difficulty of being a human rights lawyer is amplified in areas where the State is engaged in conflict with extremists or other organisations. Surendra Gadling is a Nagpur-based advocate who has successfully defended individuals accused of being Naxalites. Earlier this year, he was instrumental in securing the acquittal of Sudhir Dhawale, a Dalit activist and intellectual who was arrested by the police in 2011 for alleged Naxal links. Having dealt with extra-judicial killings and false cases during two decades of practice, he said that a major problem with working in conflict zones is that since their location is predominantly rural or in forested areas, victims of human rights violations face great difficulty in approaching lawyers. He also agrees with the approach advocated by Rajvinder Singh Bains, a human rights advocate he considers a good friend and colleague, of filing criminal complaints against State officials in cases of extra-judicial killings.

Manoranjan Routray, a young advocate practising in Koraput in Orissa, agrees. Many of those alleged Naxals are either poor adivasis or activists and intellectuals who have spoken out against the State, which in retaliation slapped them with the draconian provisions of the Unlawful Activities Prevention Act, 1967 (“UAPA”) and other similar laws invoked to ensure that the arrested person does not get bail easily. The police also use Section 3 of the Criminal Law Amendment Act, 1961 and Section 25 of the Arms Act, 1959 on a regular basis. He narrated the story of the Chasi Mulia Adivasi Sangh (“CMAS”), an organisation of tribals that came together to fight for land and forest rights. On suspicion of a few members having Naxal links, the Government of Odisha banned the entire organisation and began a systematic witch-hunt against its members. Most of those who were picked up or detained in this manner were poor adivasis who had very limited access to legal aid. Mr. Routray was representing some of them. This was only an indicator of the State’s larger effort to silence movements of assertion of identity and resistance by adivasis, who are constantly suspected and accused of supporting the Naxals even in the absence of any clear evidence. 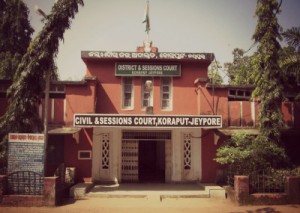 On an earlier visit to Koraput, Mr. Routray had taken me to the district court there, which is a far cry from the swanky interiors of the courts in Delhi and Bangalore. Besides the abysmal infrastructure, the place had a generally depressing feel. The overwhelming presence of armed police personnel created an intimidating atmosphere even for an outsider like me. One can only imagine what undertrials and lawyers would have to go through, visiting this place on a regular basis.

Besides the lack of basic infrastructural facilities, courts in such locations tend to be less inclined to grant bail, when stringent provisions under national security legislations are invoked. Earlier, the Terrorist And Disruptive Activities (Prevention) Act, 1987 and then the Prevention Of Terrorism Act, 2002 were used for this purpose. After their repeal, the UAPA has been invoked, along with the occasional provision from the Indian Penal Code, 1860 such as Section 124A, which deals with sedition.

Another major issue in conflict zones is that since there are very few lawyers in these areas to deal with the large number of UAPA cases, they are heavily overburdened. The police also file a large number of cases against individuals. Mr. Gadling cited one instance where 101 cases were filed against a single individual and other cases where entire villages have been accused. Consequently, lawyers in this field get several matters on a single day and often have to resort to improvisation and innovation in their arguments across several cases since it is not possible to work on each case in a planned and systematic manner.

The extent to which the law is misused is evident from the fact that in the past ten years, there has only been one conviction in the whole of Vidarbha – that of Vernon Gonsalves in 2013 (which is being appealed in the High Court). The fact that a majority of these cases are false is also illustrated by the fact that there is very little evidence that the prosecution produces at the time of the trial, barring confessional statements of other persons in custody, which usually does not stand up to legal scrutiny. However, by the time an acquittal is secured, the individual has already spent a considerable amount of time in jail, which leaves him demoralised. Thus, the law is used to terrorise and intimidate not just activists working in the field, but also people who might be interested in and sympathetic to the cause. Likewise, lawyers and activists are often subject to direct or indirect intimidation and threats by the police. While neither Mr. Galding nor Mr. Routray had been directly threatened, they admitted that they were very often working in an atmosphere of great tension and pressure. The police have made general statements warning lawyers and made indirect threats through their clients.

Both Mr. Gadling and Mr. Routray, who are practising in the towns they grew up in, said that their entry into human rights lawyering was motivated by their activism during their student days, during which they became aware of pressing socio-political issues around them. Mr. Routray also cites as an inspiration, the mentorship he received from his senior, Nihar Ranjan Patnaik, an experienced advocate who also led the local bar association. While it is important to try and be self-financed, financial support is also available in the form of donations from well-wishers towards individual cases, as well as through informal networks with organisations like ActionAid which work in these areas.

In situations like these, where one is constantly under threat, solidarity is critical. There is an informal network of lawyers working in these conflict zones, particularly Vidarbha, Chhattisgarh, Jharkhand, Odisha, and southern Madhya Pradesh. This network is often called on to help in situations where the same individual is charged with offences in two or more states, which is often the case, given that the so-called ‘red corridor’ extends across state boundaries, as do police efforts against it. There are also a few senior advocates in some high courts and the Supreme Court who maintain contact and provide help when required. Indeed, the role of the advocate in conflict zones is more political than legal. It is a statement against the State’s attempt at silencing dissent and more lawyers need to take up cases in these areas.