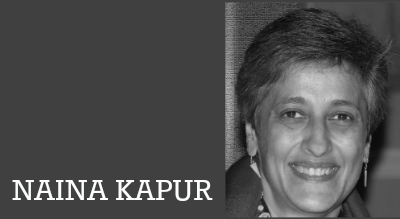 In 1915, having completed all the necessary qualifications in law, Regina Guha applied to be a pleader at the Calcutta Bar. Her application found its way to the High Court of Calcutta where a four-judge bench had to determine whether “persons” admitted as “pleaders” included women. With unhesitating certainty, the bench declared they had “no escape from the position that the Legislature in this country never contemplated the admission of women to the rank of Legal Practitioners.” There was nothing in the legislation which prohibited women as pleaders. Moreover, degrees in law could be conferred on both men and women in Calcutta University. But the bench was adamant.

“There may obviously be weighty reasons why in the University Act words importing the masculine gender may be taken to include females… in the Pleaders Act no such intention can reasonably be attributed to the Legislature.”

In hindsight, the overt gender bias within such reasoning is glaringly obvious. Today however, the heart of such inequality lies in the subtlety of a subtext and its impact on women.

Much has been made of the fact that three out of four lawyers appointed as Senior Advocates by the Supreme Court last week were women. When it comes to equality however, context is relevant. According to a 2013 list of Senior Advocates designated by the Supreme Court of India since 1955, only five out of 309 have been women. As of this week, that number increased to eight. Even that has taken close to fifty years. Of the 200-plus lawyers appointed as Senior Advocates in Delhi and Mumbai over a period of twenty years (up to 2011), only three were women.

Is it a trend? For now, that might be premature. While headlines on such appointments make visible the obvious contribution women are making within the legal profession, the trickle of numbers betrays an underlying subtext of systemic bias within which decision-making about such appointments (be it the Bench or the Bar) continues to take place. That is why the message of leadership matters. To his credit, the transitional ease with which the current Chief Justice of India, through such appointments, has signaled a readiness to abandon the gendered myopia which plagues the profession is certainly welcome. Equality can be a place from which stereotypes and prejudices are challenged or from where they are perpetuated. From that perspective, I would urge more such champions, within law firms, legal academia, social media, civil society law groups, and other law related workplaces to follow the Chief Justices’ cue- assault the system with women and level the playing field.

In that vein, as one amongst a growing population of women who now embody the profession of law, I applaud my professional peers — Vibha Dutta Makhija, Kiran Suri, and dear friend Meenakshi Arora for the recognition they have all earned and justly received.

Regina would be beaming — for the “persons” who are now apparently women — as are all of us.

(Naina Kapur is a preventive law and equality advocate.)

2 replies on “For the “persons” who are women”

Indeed all of us women advocates owe a lot to Regina Guha and the like who struggled for equality for women in the bar and elsewhere. But still the glaring disparity in the current statistics amaze me. Clearly, the society still refuses to accept women as equals. Appointment of 3 women out of 4 as senior advocates recently is however a welcome change. Eagerly looking forward for more such positive statistics.

Yes Nitya, the statistics do astonish. I was asking a senior advocate y’day what he thought and he said “these things take time”. I then asked him if he would have been ok with that response had he been a black man living in apartheid South Africa?