The Supreme Court’s decision in Enercon (India) v. Enercon GmBH (dated February 14, 2014) is pretty significant for cross-border arbitration. While it does not drastically change the law the way BALCO for example did, it discusses (at length – the judgment is forty-odd pages) several issues of drafting, interpretation, and choice-of-law that we do not have too much jurisprudence on. In this post, we will go over the issues related to the drafting of the arbitration clause.

But first, the facts

The dispute between Enercon (India) and Enercon GmBH was a long-standing one. It started in 2008 and involved a number of courts along the way – the trial and appellate courts of Daman, the Bombay High Court, and the English High Court. We won’t get into the proceedings at length here; suffice to know that all these proceedings were procedural in nature, and did not involve a substantive decision on merits. Those keen to know more can read Paras 3 to 31 of the Supreme Court judgment.

The dispute was over a wind energy joint venture in India between a German and an Indian party. The German entity alleged that royalties and damages amounting to approximately Euros 89 million were due to it under an agreement that the parties had allegedly executed, the Intellectual Property Licence Agreement (“IPLA”).

The IPLA, in clause 18, was subject to an arbitration agreement:

“18.1 All disputes, controversies or differences which may arise between the Parties in respect of this Agreement including without limitation to the validity, interpretation, construction, performance and enforcement or alleged breach of this Agreement … any Party may refer … for resolution to an arbitral tribunal ….”

The arbitration clause (which we haven’t reproduced in full here – we’ll set them out in the context of the different points we will discuss) raised a number of issues that came up before the Supreme Court. There were arguments that the clause was invalid, and that even if it was valid, it was unworkable. There were also several arguments about the choice-of-laws of the parties, as the choice-of-law language in the clause was very poorly drafted.

The unworkability of the arbitration clause

In a previous post we had discussed how courts sometimes construe arbitration clauses in a narrow and semantic manner, drawing distinctions between references to arbitration containing the words “all disputes arising out of or in connection with this agreement” on the one hand and “all disputes under this agreement” on the other. This approach, you may remember from reading that post, was severely criticised and rejected in England for being antithetical to the pro-arbitration policy in place in most modern legal systems. The pro-arbitration policy requires courts to enforce arbitration clauses whenever possible – interpret them to ‘make them work’. 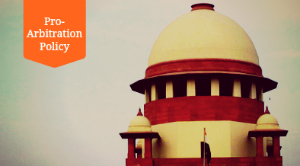 The Indian Supreme Court, in the Enercon case, adopted a similar stance and said that interpretation should be approached in a commercial manner, adopting “the attitude of a reasonable business person”, and not in a legalistic or semantic manner. In other words, if the clause indicates a clear intention to arbitrate, then that intention should not be voided simply because the drafters did not articulate this intention well.

In this case, a part of clause 18, the part dealing with arbitrator appointments, was drafted in an unworkable manner. It read:

“… any Party may refer dispute(s), controversy(ies) or difference(s) for resolution to an arbitral tribunal to consist of three (3) arbitrators, of whom one will be appointed by each of the Licensor [Enercon] and the Licensee [EIL] and the arbitrator appointed by Licensor shall also act as the presiding arbitrator.”

The Court was however, prepared to give effect to this clause. It did so by essentially severing the problematic words, “and the arbitrator appointed by Licensor shall also act as the presiding arbitrator” from the clause, and allowing the default mechanism set out in Section 10 of the Arbitration and Conciliation Act, 1996 — that of having the two party-appointed arbitrators choose the presiding arbitrator or the chairman — to operate in its place.

The Supreme Court has taken a very positive stance in enforcing such a difficultly worded arbitration clause. That the court is committed to a pro-arbitration policy that was set in motion by BALCO is a source of comfort.

In the next post, we will look at some of the choice-of-law questions that clause 18 threw up, as well as the Supreme Court’s discussion on separability of the arbitration clause.

(Sindu Sivakumar is part of the faculty at myLaw.net.)

Can the arbitrator indulge in cross examinations on account of mismanagment fraud tenancy rights etc?