There is a reference to a ‘defence’ of invalidity of a design in Clauses (3) and (4) of Section 22 of the Designs Act, 2000. Does that refer to a counter-claim for the cancellation of a design, filed in response to a suit for infringement of the design?

Section 22(3) of the Designs Act states that the grounds for cancellation of a design enumerated in Section 19 of the Act may be raised as defences in a suit for design infringement. In my opinion, Section 22(3) provides only for a ‘defence’ of invalidity, but not a ‘counter-claim’ seeking the invalidation of the registered design. 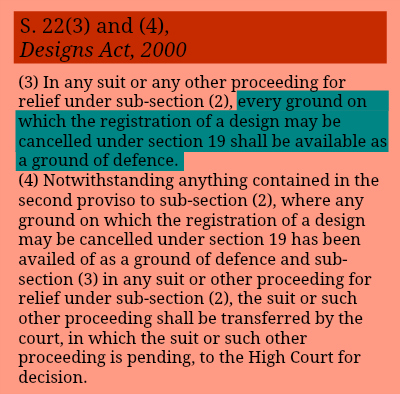 Unlike Section 64 of the Patents Act, 1970 which speaks of both a counterclaim to a suit and a standalone petition before the Intellectual Property Appellate Board to revoke a patent, Section 19 of the Designs Act restricts itself to a petition for cancellation of the design before the Controller of Designs and does not provide for a counterclaim. The framework of the Designs Act in a way, is actually similar to that of the Trademarks Act, 1999, wherein there is no provision for the rectification of a trademark by a court. Therefore, although it is possible for the defendant in a suit for design infringement to raise the defence of invalidity of the design as part of his written statement, it is not in the nature of a counter-claim. At best, such a defence could have the effect of preventing the grant of an interim or permanent injunction if the court comes to the conclusion that the validity of the design is under serious threat. However, the court does not have the power to revoke or cancel the registered design.

The difference between a “defence” and a “counterclaim” in the context of patents was explained by the Allahabad High Court in Fabcon Corporation v. Industrial Engineering Corporation (AIR 1987 All 338). In this case, the plaintiff claimed that since a defence of invalidity of the patent under Section 107(1) was taken by the defendant, such a defence must be deemed as a counterclaim under Section 64 of the Act. This would mean that the suit for infringement had to be transferred along with the deemed counterclaim to the High Court.

The High Court disagreed with the plaintiff and took a view, which I fully agree with and have always believed in, that a defence as envisaged under Section 107(1) is not the same as filing a counterclaim of revocation under Section 64 of the Act.

To me, the mechanism under the Designs Act is a curious mix of options provided in the Patents Act and the Trademarks Act. It envisages transfer of the suit to a High Court when an invalidity defence is raised, which is similar to the proviso to Section 104 of the Patents Act, with the exception being that the proviso in the Patents Act mentions the suit, “along with the counter-claim”. The absence of any mention of a counter-claim seeking cancellation of the design is similar to the mechanism in the Trademarks Act. And yet, unlike Section 124 of the Trademarks Act , there is no provision for stay of the suit for design infringement during the pendency of the cancellation petition.

What complicates this straightforward conclusion that the Designs Act does not provide for a counter-claim is Section 23, which makes Sections 106 (suit for groundless threats of infringement) and 113 (issuance of certificate of validity of a patent) of the Patents Act applicable to the Designs Act with incidental changes. Extracted below is Section 113 of the Patents Act:

If this provision is to be applied with incidental changes to the Designs Act, how would it read? One possible reading could be as follows:

Another possible reading could be as follows:

(J. Sai Deepak, an engineer-turned-litigator, is a Senior Associate in the litigation team of Saikrishna & Associates. He is @jsaideepak on Twitter and the founder of “The Demanding Mistress” blawg. All opinions expressed here are academic and personal.)