Can a patentee, after filing a suit for infringement and securing an interim injunction against the defendant, withdraw the suit at will? Interim orders after all, are granted only on a prima facie appreciation of the case and the result at the end of the trial could well be in favour of the defendant. Can the plaintiff therefore, be permitted to withdraw the suit at will without affording the defendant an opportunity to establish his case at trial? Also, since interim orders could have caused significant injury or loss to the defendant, can the defendant not legitimately expect restitution for the loss suffered by him? These questions are not answered by the Patents Act, 1970, but instead, require us to look into the Code of Civil Procedure, 1908 (“CPC”).

The relevant provisions of the CPC are Order 23, Rule 1 and Section 144. Order 23 of the CPC deals with ‘Withdrawal and Adjustment of Suits’.

Clearly, the plaintiff-patentee has the right to withdraw the suit at will, and there is nothing in the law that prevents him from doing so. The defendant however, is not without a remedy and can seek restitution of the costs incurred by him during the course of the litigation and as a consequence of it. Section 144 of the CPC provides for a remedy in such a situation. 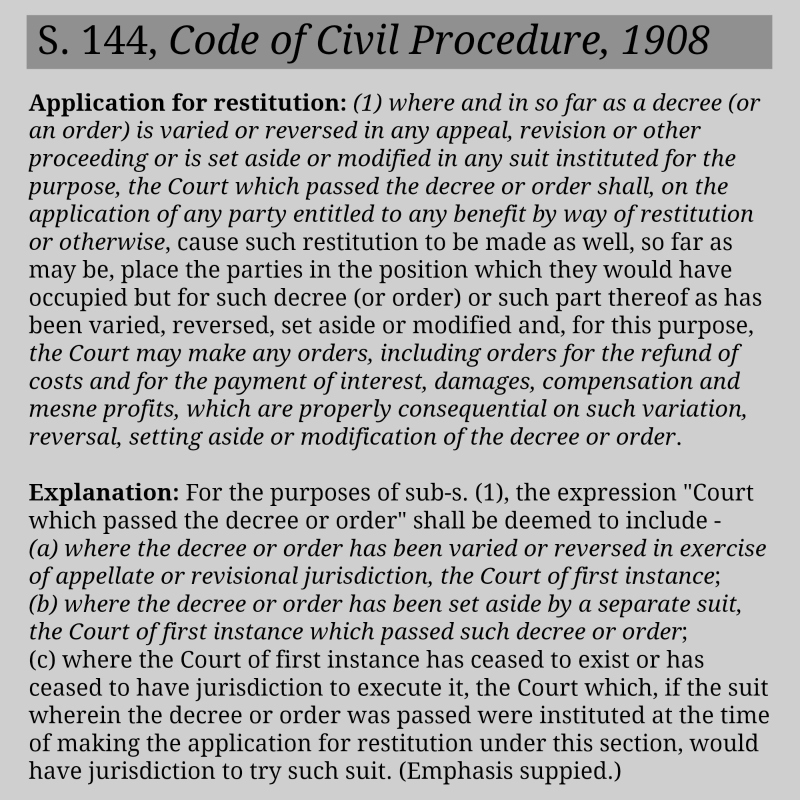 Sub-section 1 of Section 144 provides for restitution when a decree or order undergoes variation or reversal in an appeal or revision or “any other proceeding”. The sub-section also envisages restitution upon setting aside or modification of the decree or the order passed in the first suit in a counter-claim or a counter-suit instituted for the purpose of setting aside or modifying the decree or the order in the first suit.

However, there is no express mention of whether or not such restitution is available in the event of withdrawal of a suit. That said, the provision is broad enough to accommodate such an eventuality since it refers to variation or reversal in “any other proceeding”, a phrase that captures the spirit of the provision to provide a remedy to a defendant who has suffered losses or costs as a consequence of the plaintiff’s suit.

When can an application for Section 144 be filed? Who can it be filed before?

Sub-section 1 of Section 144 answers both these questions. An application under Section 144 may be filed before the court which passed the decree or the order which was subsequently varied or reversed. 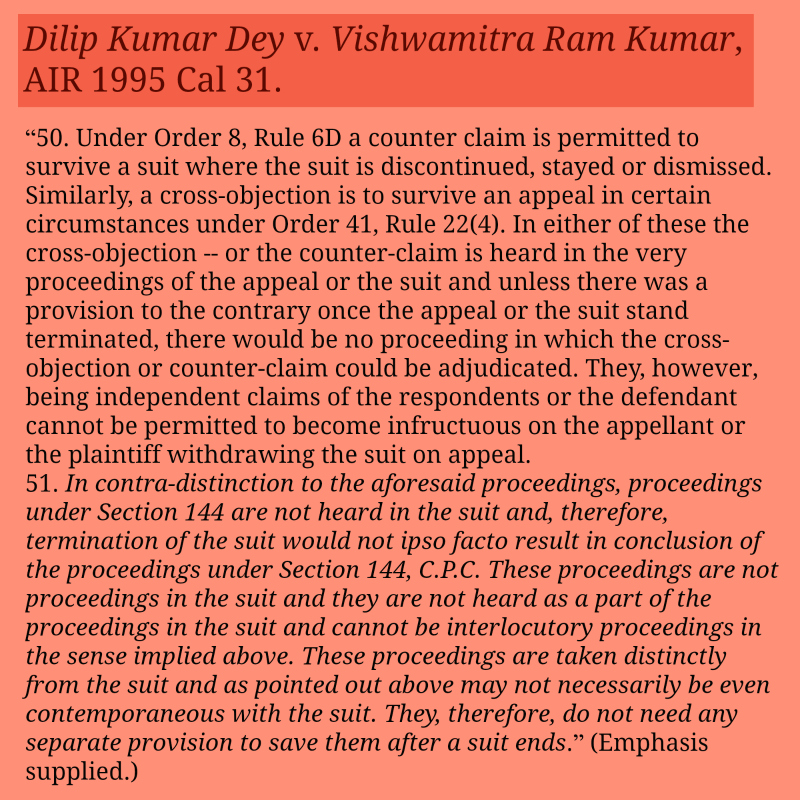 Instead of an application under Section 144, can a counter-claim for damages or costs be instituted by the defendant? Sub-section 2 of Section 144 bars such a counter-suit:

(2) No suit shall be instituted for the purpose of obtaining any restitution or other relief which could be obtained by application under sub-section(1).

In summary therefore, although the plaintiff may withdraw the suit at will, the defendant is not without remedy to seek restitution, courtesy Section 144 of the CPC. An independent application can be filed, notwithstanding the withdrawal of the suit. Secondly, a remedy which may be sought under Section 144 cannot be sought by way of or as part of a counter-claim or a counter-suit.