We need to get rid of two red herrings that have captured at least some of the debate that followed the Supreme Court’s decision in Suresh Kumar Koushal and Another v. NAZ Foundation and Others. The first is the issue of the presumption of constitutionality of the Indian Penal Code, 1860 (“IPC”) and the second relates to whether the Court characterised the Delhi High Court’s judgment as an instance of judicial overreach.

The question of presumtion of constitutionality

“Pre-constitution laws are not to be regarded as unconstitutional. We do not start with the presumption that, being a pre-constitution law, the burden is upon the State to establish its validity. All existing laws are continued till this Court declares them to be in conflict with a fundamental right and, therefore, void. The burden must be placed on those who contend that a particular law has become void after the coming into force of the Constitution by reason of Article 13(1), read with any of the guaranteed freedoms.”

If the presumption of constitutionality does not apply to pre-Constitution laws, two anomalies arise.

– Firstly, there is no reason for anyone to consider themselves bound by any provisions of a law such as the IPC (which also criminalises murder, for instance), unless those provisions are declared constitutional. Not having a presumption of constitutionality is another way of saying that the law is not valid until found to be so by the Supreme Court or any high court.

– Secondly, many pre-Constitution laws still in force today are relatively innocuous – for instance, the Indian Contract Act, 1872, the Transfer of Property Act, 1882, the much-loved Code of Civil Procedure, 1908, and a substantial chunk of the law of tort (not all pre-Constitution laws are in the form of statutes). Is there any reason these laws should not have the presumption of constitutionality?

The Supreme Court in this case was correct to state that the presumption of constitutionality applies to Section 377. The error, as far as this issue is concerned, was in then stating (in Para 32 of the judgment):

“While [the presumption of constitutionality] does not make the law immune from constitutional challenge, it must nonetheless guide our understanding of character, scope, ambit and import.” 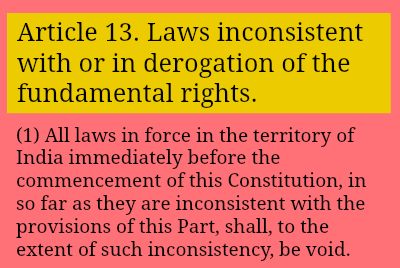 Did the Supreme Court characterise the High Court judgment as a case of judicial overreach?

Two or three passages from the Supreme Court’s judgment appear to have created an impression (especially prior to the publication of the full judgment online) that the main reason for setting aside the judgment of the High Court was the doctrine of separation of powers, with the Court acknowledging that interpreting Section 377 as unconstitutional would be an instance of judicial overreach. These passages perhaps were:

“In fact a constitutional duty has been cast upon this Court to test the laws of the land on the touchstone of the Constitution and provide appropriate remedy if and when called upon to do so. Seen in this light the power of judicial review over legislations is plenary. However, keeping in mind the importance of separation of powers and out of a sense of deference to the value of democracy that parliamentary acts embody, self-restraint has been exercised by the judiciary when dealing with challenges to the constitutionality of laws.” (Paragraph 26)

“In its anxiety to protect the so-called rights of LGBT persons and to declare that Section 377 IPC violates the right to privacy, autonomy and dignity, the High Court has extensively relied upon the judgments of other jurisdictions.” (Paragraph 52)

“Notwithstanding this verdict, the competent legislature shall be free to consider the desirability and propriety of deleting Section 377 IPC from the statute book or amend the same as per the suggestion made by the Attorney General.” (Paragraph 56)

(The previous parts of this article are here and here.)

I have been going through your well drafted article on comparison of 2 landmark judgments of Hon’ble Delhi High Court and of Hon’ble Supreme Court of India on section 377 of IPC. I am not going into that depth as it is just a reply based on the valid points… And I am not going into the technicalities as all of us know and do not want to compare the judgments and also the earlier judgments which are totally based upon the non-consensual un natural sex or child abuse as per section 377 of IPC…

In regard to discussion of section 377 of IPC whether the consensual homosexuality amongst the adults be decriminalized or not? I find the following reasons to support that the homosexuality amongst the adults be decriminalized:-
1. They are major enough, if consensual penile vaginal sex between the two majors is legal then why the non-vaginal sex be illegal as per section 377 ? It is indeed discriminatory but there is a big big difference as being natural and unnatural though.
2. There is need to protect them as they most vulnerable to HIV/STDs and for that they should come forward and that is possible only if the homo-sexuality is decriminalized.
–
I do not support for the following reasons:
1. Legalizing all the acts of adults or consensual acts would amount to deterioration of our roots or ethical/moral values.
2. Legalizing homosexuality would lead to more and more msm/homosexuals and lesbians.
3. legalizing unnatural sex would lead to gay prostitution as it would be completely legal based on consent of adults therefore, no one can stop them.
4. sodomy is a substitution to satisfy sexual needs, it will be more and more prevalent by giving it legal sanctity and people would justify and use if as a Right/Norm therefore, there would flood of gays/Lesbos and similarly it will open floodgates of delinquent behavior.
5. Even legalization of prostitution in India subject to other limitations has not proved fruitful as the prostitutes are still living in the worst conditions.
6. It will promote MSM and in result much more divorce and indeed we have hired divorced culture at present from the Western and not gayism too…

I can support an amendment but not the decriminalizing of homosexuality… Rest indeed as in India the will of media and government prevails and the result is with us that the society is getting more vulnerable as uncommitted relationships, harassment and violence against women, men and children and the most brutal is the outraging the modesty of any human being, rapes at the top and sexual exploitation of animals and so on…

Rather being disciplined in lives, we are choosing the other ways out to satisfy our self created desires or say unnatural desires, I am glad that Mr. Justice Singhvi understood it however, I still appreciate and will for some sort of amendment or best possible route without removing the instant provision of IPC.

Have a wonderful time and thanks for sharing…