Two years ago, Nalsar’s Student Bar Council adopted an accountability policy. It had a formal mechanism of holding student representatives accountable including the appointment of a financial auditor and a grievance redressal officer for each activity-based committee. The auditor had to submit a report on the committee’s functioning at the end of the year.

Even before the policy came into force, if serious misconduct by a Student Bar Council (“SBC”) member was discovered and reported, students could (and often would) convene a meeting of that member’s activity-based committee. Today, some representatives even inform the students, either of their own accord or in response to queries, about the activities of the SBC.

These (formal and informal) mechanisms are creating a culture of accountability within the SBC. What they do not reveal is how the representative body has not once protested declining standards of academic integrity.

Problems such as academic dishonesty among the faculty, high-handed wardens, unacceptable messing and other hostel services, and ridiculous rules of discipline are prevalent in nearly all the NLUs. On a recent visit to the Gujarat National Law University, I saw hostels that resembled prisons  – there was not enough ventilation or provision for drainage and no emergency escape planning.

Accountability usually refers to the duty of people in positions of power to justify or give reasons in support of the decisions and actions they have taken on behalf of their constituents or stakeholders. However, because a student government can negotiate with the administration of a college on more even terms than individual students, and because student grievance redressal mechanisms are either in their formative stages or absent, student representatives must assume a duty to seek explanation from the authorities until important issues are brought to the table. 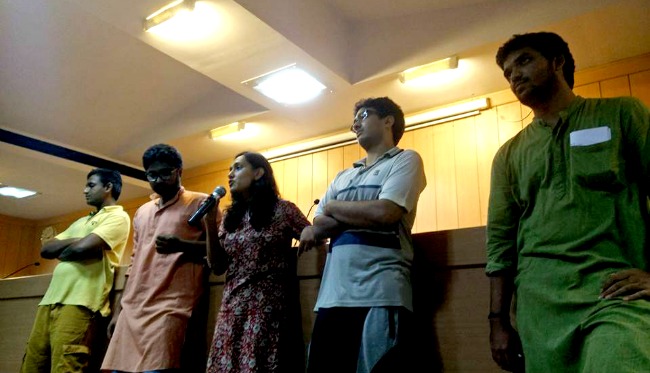 The Executive Body of NALSAR’s Student Bar Council addressing a gathering of students.

Engagement may even have to be confrontational and in extreme cases, take the shape of civil disobedience. Our ideas of accountability among student governments and representatives therefore, should be broadened to include questions about whether the representative body publicly articulates disagreements with the college administration or builds opinion about any aspect of their functioning.